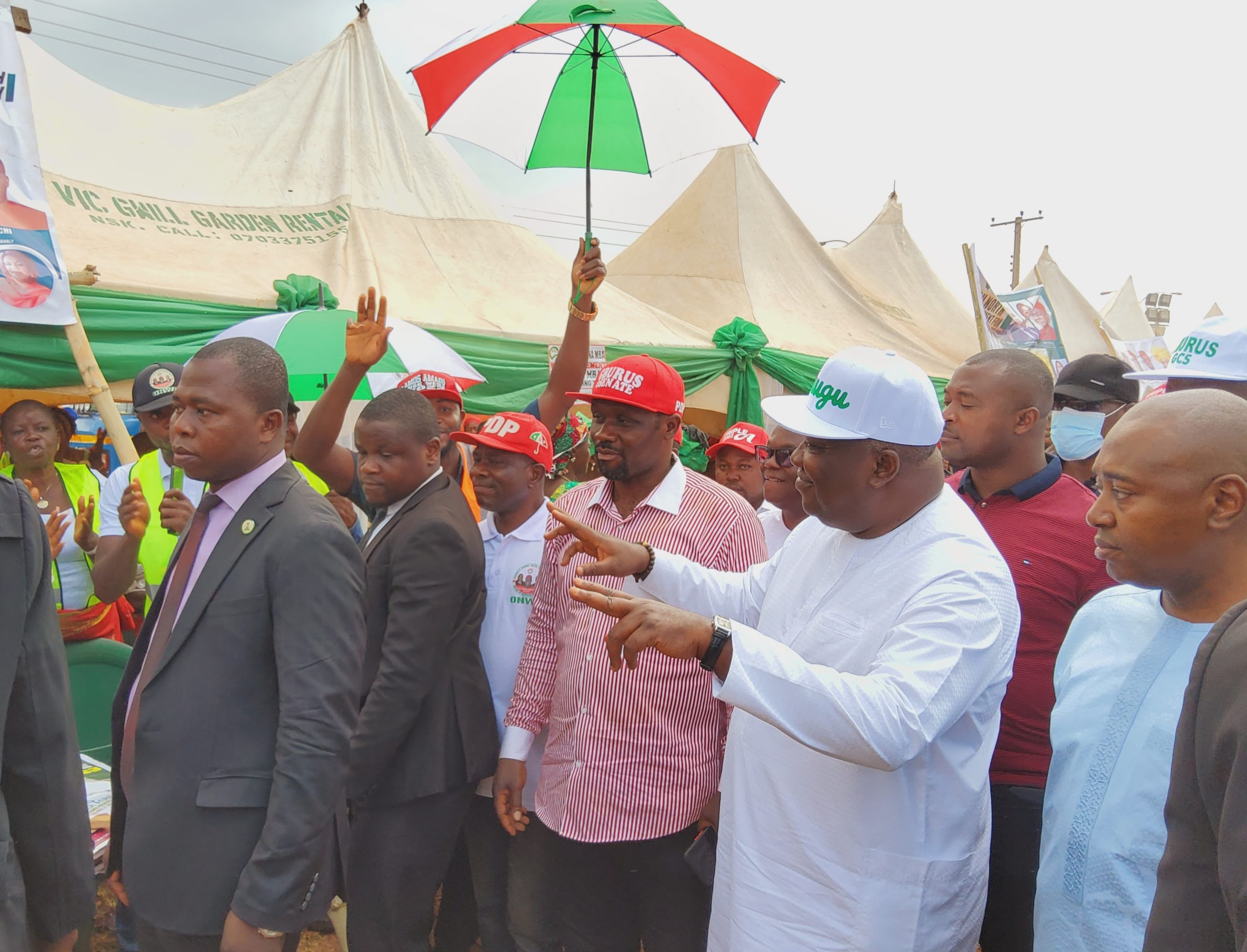 The people of Nsukka West Constituency in Nsukka Local Government Area of Enugu State, yesterday, gathered in their numbers in Nsukka town to celebrate Governor Ifeanyi Ugwuanyi who is the candidate of the Peoples Democratic Party (PDP) for his good works in the state, Nsukka zone and the area in particular.

The Nsukka West people assured Governor Ugwuanyi of their 100 percent votes for him to represent Enugu North Senatorial District in the National Assembly in 2023.

The jubilant people of Nsukka West Constituency, comprising political leaders, stakeholders, traditional rulers, women and youths, among others, endorsed Governor Ugwuanyi and other PDP candidates in the state at a well-attended rally organised by the PDP candidate for Nsukka West Constituency, Hon. Agbo in support of Gov. Ugwuanyi’s senatorial bid.

This came as the grateful people of Ozalla, the third largest community in Igbo-Etiti LGA of the state, at a thanksgiving service/rally, unanimously declared their support for Governor Ugwuanyi and pledged to vote massively for him and other PDP candidates in the state, disclosing that the governor has liberated them from political bondage.

The Ozalla people, who conferred a chieftaincy tittle of “Oguguma 1 of Ozalla” on Governor Ugwuanyi in recognition of his administration’s unprecedented interventions in their community and recent appointment of their sons and daughter into sensitive government positions for the first in the history of the state, told the governor that “we are going to surprise you by making sure that none of the PDP candidates in Enugu State will lose one vote in any of the polling units in Ozalla community come 2023 elections.”

Similarly, the people of Edem Ani in Nsukka LGA, gave the governor a pat on the back for his good works in Enugu State in general and Nsukka zone in particular and assured him that they will deliver 100 percent votes for him and other PDP candidates.

They presented ‘Ofo’ to the governor as a symbol of their endorsement of his senatorial bid.

At the rally, the people of Nsukka West Constituency said that Governor Ugwuanyi has sacrificed a lot for the state to enjoy peace and good governance in spite of all the economic, security and public health challenges confronting the country since he assumed office in 2015.

The people added that they were delighted and fulfilled that Governor Ugwuanyi, who was present at the rally, kept faith with his inaugural address to equip and modernise Nsukka as a university town and the second largest town in Enugu State, stressing that Nsukka West Constituency is a major beneficiary of the governor’s milestone achievements in Nsukka zone.

Speaking, the PDP candidate for Nsukka West Constituency, Hon. Agbo, disclosed that the major reason they gathered in their numbers was to show support for the governor and ensure that he wins the forthcoming senatorial election overwhelmingly.

Hon. Agbo stated that the people of Nsukka West Constituency are delighted at the good works of the governor, stressing that the PDP-led state government has been good to them and that they have decided to continue to follow the party.

“Your Excellency, these women, youths and the elderly here have seen your good works and that of the PDP and they chose to follow you. The most surprising aspect of it all is that most of them are not from the PDP. Most of them are not registered PDP members but they said that the government of PDP is good to them and for that reason, they chose to join PDP and deliver the party 100 percent in 2023 elections.”

Thanking Governor Ugwuanyi on behalf of the people of Nsukka West Constituency, the PDP candidate for Nsukka/Igbo-Eze South Federal Constituency, Engr. Abba maintained that even a blind man can feel and believe in what the governor has done in Nsukka zone especially in the constituency.

Engr. Abba told the governor that the crowd at the rally and the joyful expression of the people were clear indications that “all the lies that have been told to you are now known to you.”

Commending Governor Ugwuanyi for numerous ongoing development projects of his administration in communities in Nsukka, Engr. Abba said: “Your Excellency, my people here are happy with you for so many reasons. At Nru, a lot of projects are ongoing around the community; at Okpaligbo, projects are ongoing; at Ozzi/Akpa Edem, road construction is taking place; in Lejja, Opi, Eha Alumona, roads are being constructed; most of the massive projects in the newly established State University of Medical and Applied Sciences (SUMAS) are completed and the remaining ones almost completed. How many should we count? Thank you so much.

“Your Excellency, God gave you to Nsukka and Nsukka knows that you are her true son. We don’t have much to say now because this is just Nsukka West House of Assembly campaign. You will still come back for the House of Representatives campaign and the senatorial campaign, and we will unveil everything.”

Welcoming Governor Ugwuanyi to the rally earlier, a group of like minds who were behind the organisation of the rally, revealed that the crowd at the event were majorly young people the governor has empowered and shown quality leadership in their various communities.

Speaking on their behalf, Barr. Foster Ugwuoke revealed that “the people here are the crowd required to give you (Ugwuanyi), Dr. Peter Ndubuisi Mbah and Barr. Ifeanyi Ossai landslide victories come 2023 as well as other candidates of the PDP in Enugu State”.

He maintained that the crowd was grassroots-oriented “not urban guerrillas”, adding that they have the capacity to deliver the governor, Dr. Mbah and other PDP candidates in Nsukka West Constituency.

Addressing the crowd, Governor Ugwuanyi expressed gratitude to them for their show of love, solidarity and support, expressing confidence that the PDP will record landslide victories at the polls.

“As we campaign, do it as relations. And above all, pray always for the state; and with your prayers and support it will surely end in praise.”

Dignitaries at the rally include the PDP deputy governorship candidate, Barr. Ossai, the former Secretary to the State Government, Dr. Dan Shere, the Director General of PDP Campaign Organisation in the state, Chief Ikeje Asogwa, the PDP candidate for Nsukka East Constituency, Barr. Mrs. Christiana Onah, among others.

On their part, the emotional people of Ozalla community describing Governor Ugwuanyi as a jinx breaker, reiterated that he wiped away their tears and put an end to the neglect they suffered for decades.

Welcoming Governor Ugwuanyi, the President General (PG) of Ozalla General Assembly, Dr. Ndubuisi Okwor-Igwe, stated that “today is a memorable day in the history of Ozalla as this is the first time we are seeing a governor in Ozalla.”

Dr. Okwor-Igwe said that the day was “a time to celebrate the man who did the earthwork and drainages on Ozalla-Ohodo road, Ozalla-Aku road, Ozalla-Ohebe road and Ozalla-Lejja road.

“It is a time to celebrate the man who appointed our sons and daughter into the most exalted positions in the history of the town, including Barr. Kingsley Awuka as a Special Adviser (SPA) to the Governor; Engr. Remi Eze as a Permanent Secretary in the Enugu State Civil Service; Hon. Ekene Ojobeagu, Hon. Clinton Ogbonna and Hon. Nnaemeka Nweze as Special Assistants (SAs); Hon. Alex Ugwu and Hon. Mrs. Nwanaso as Technical Assistants (TAs) to the Governor.

“I have not also forgotten that I am not only the first Administrator of the Igbo-Etiti North Development Centre, but also the only Administrator in Igbo-Etiti Local Government Area that is serving his second term. His Excellency alone made all these possible.”

Corroborating the PG’s remarks, Barr. Awuka, lauded the governor’s display of exemplary leadership qualities by involving the community in the choice of those who were recently appointed into government positions, stating that it was a rare privilege they will not take for granted.

“We have never voted any other party apart from PDP talk more of now that you have given us a sense of belonging and placed us in different political positions,” he said.

Conferring the Chieftaincy tittle of Oguguma I of Ozalla, the Traditional Ruler of Ozalla Uwani, HRH Igwe Akubue Ezeja, supported by the traditional ruler of Ozalla Uwelu, HRH Igwe Emmanuel S. Ugwuada, thanked Governor Ugwunayi for liberating their people and breaking the jinx of neglect and deprivation they had suffered in the past, and asked God to continue to bless and reward him abundantly.