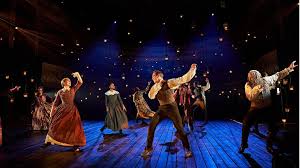 Charles Dickens’ A Christmas Carol was published at the end of 1843. Within weeks stage versions were chilling the spines of Victorian theatregoers – while warming their hearts too.

But the ghostly story of the miserly, misanthropic Scrooge and his spiritual salvation has been in the theatre this year more than ever. Is there something about the tale which speaks to hard times?

Earlier this year Owen Calvert-Lyons took charge of the historic Theatre Royal in Bury St Edmunds in Suffolk. He was looking forward to staging Cinderella as its annual Christmas panto – the financial bedrock which keeps many British theatres solvent for the rest of the year.

A Christmas Carol at the Theatre Royal in Bury St Edmunds

But he began to think how disruptive the Covid-19 pandemic might become for theatre everywhere. In fact for now, despite the tightening of restrictions elsewhere this weekend, Suffolk remains in tier two and shows can continue if properly socially distanced.

“So I decided we’d do our Christmas show outdoors in the town centre. But that meant finding something shorter and relatively simple to stage,” he says.

“A Christmas Carol was the obvious choice – it’s easier to find dramatic shortcuts with a story which is already familiar to people watching”.

“Also the story works well with a small cast of five like ours – and certain effects really suit a winter evening.”

Actress Rebecca Peyton looming out of the darkness on stilts as a huge black-clad Ghost of Christmas Future is an image not to be forgotten.

The people saving pantomime this Christmas – oh yes they are!

London’s Old Vic has cannily re-staged the production it originated in 2017: this year it’s livestreamed only with no audience to worry about.

The cast of the Old Vic’s A Christmas Carol

Thorne says surprisingly few changes needed to be made to the show.

“Coronavirus did force a few alterations – no one now is carried by another actor, for instance. But the substance of the play is identical and Rob Howell’s brilliant set and the music are still there.”

Why does Thorne think a story written to be read in a book lends itself to the stage 177 years later?

“One basic thing has always been that it’s in four acts – the arrival of the three ghosts and then Scrooge’s redemption at the end. It’s a lovely Ibsen-like structure. And the story clearly turns on one character which helps theatrically”.

“But one reason Dickens is a literary hero for me is that almost always he frames a story through a political landscape – but he never lets that landscape dominate the telling. That’s definitely true in A Christmas Carol and I adore him for it.”

It would be easy to assume that what has prompted the glut of Christmas Carols in 2020 is Covid-19. It’s a story which, in difficult times for theatre-makers, can be staged simply but which offers a wonderful feel-good ending for audiences in need of joy in their lives.

Thorne focuses instead on the poverty which gave Dickens’ tale its troubled heart.

“It’s shocking that foodbanks – which when I was a kid barely existed- have become the norm. I feel like we’re letting society down in a way Dickens would have recognised”.

“We’re returning to a Victorian idea of what Britain should be and Covid only accelerated that. I’m sure that’s why so many people now find A Christmas Carol in their hearts in 2020”.

“At the end, Dickens gives the moneylender Scrooge redemption through sharing – and that shows us there are ways we all can be redeemed”.

“After each performance we ask for charity donations and this year it’s for the charity FoodCycle. They supply meals to people in food poverty – and the donations online have been through the roof.

Dickens’ tale is not only playing in British theatres. It’s a seasonal favourite in the US as well. Director Michael Baron is staging it for the tenth year running at the Lyric Theatre in Oklahoma City.

“In American theatre A Christmas Carol is the great holiday attraction for families, just as the Nutcracker is for ballet companies,” he says.

But almost 5,000 miles from Suffolk, Baron had also begun to think about how tricky the pandemic might make productions for the rest of 2020.

“And so you look for a way to turn that into a positive,” he says.

“We’re really lucky that we have the Harn Homestead near us which is a beautiful open air collection of historical American buildings in a big park in downtown Oklahoma City.

“I won’t claim it exactly resembles Victorian London but using it for the story gives a historical feel which people just love. And we still have a cast of 17. Actually we hope to use the location again next year, whatever happens with the virus.”

Baron echoes some of Thorne’s ideas on why A Christmas Carol is so popular this year.

“Well firstly it’s a great story and that will never change. But I think this year particularly the political elements and the need for hope and being empathetic to your fellow man has really come to the forefront in America”.

“The parts of the story which deal with the Cratchit family’s poverty and Tiny Tim’s illness and death are set in England of course. But they remind people that the healthcare system isn’t equal in America and the wealthy fare better”.

“And there’s a coronavirus aspect too. There’s a line in the script where in the future sequence a character says of Scrooge, ‘Oh I hope he didn’t die of anything catching.’ And this year you hear audience members catch their breath at that point in a way they never did.”

In the years the production has existed the theatre has collected more than $200,000 (£148,000) from audiences for the Regional Food Bank of Oklahoma. “You see people in food-lines here in Oklahoma City which is shocking.

“Every year I say to the cast there’s lots of spectacle and ghosts and really witty dialogue that’s straight from Dickens. But really the whole story stems from finding the honest emotion in the death of Tiny Tim”.

“This year – being outside – the wind’s blowing and maybe it will be snowing and we even had an ice-storm one weekend. But we still have audible tears in the audience because, with coronavirus, thoughts of death have been so present recently”.

“Dickens’ story is a reminder every year of the humanity and generosity we should show anyway.”