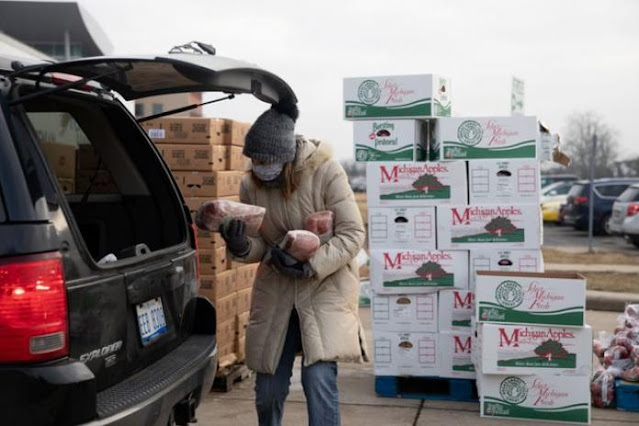 Hundreds of cars line up before dawn on weekly distribution days for the Forgotten Harvest’s partner food pantries in the metro Detroit area, where visits are up by 50% this year.

The need has grown as the coronavirus pandemic has shut down offices and other businesses. So has the response.

Monetary donations to the food bank are on pace to top last year’s contributions, helping to fund a larger storage space and new mobile distribution sites required to distribute food safely during the crisis.

“The only good thing about this pandemic is that it’s made people care a little bit more about their neighbors,” said Christopher Ivey, director of marketing for Forgotten Harvest, one of the largest food banks in Michigan”.

The economic crisis set off by the pandemic has widened the chasm between the “haves” and the “have-nots” in the United States in new ways. People who can work from home, often in higher-income jobs, are comfortable”.

But over 20 million Americans rely on unemployment benefits, and hunger and poverty are rising.

The expanded has been accompanied by an outpouring of donations to local food banks, crowdfunding campaigns and other aid to financially devastated Americans.

Amazon shareholder Mackenzie Scott’s $4 billion in charitable contributions, announced earlier this month, may be the biggest. But plenty of Americans are also chipping in, donating $10 or $20, some for the first time ever.

Many non-profits have suffered this year as the pandemic shuttered galas and fundraisers. But donations to some small and mid-sized charitable organizations were up 7.6% in the first nine months of 2020 over 2019, according to a recent analysis by the Association of Fundraising Professionals, which tracks nearly 2,500 groups. The number of donors is up by 11.7%.

The trend seems to have continued in December, typically the most active time for charitable giving in the United States, early data show. Charities received $2.47 billion in donations on Dec. 1, the Tuesday after Thanksgiving known as GivingTuesday, up 25% from 2019.

Much of that is coming in small dollar amounts, suggesting that people across the income spectrum are stepping up their contributions, Rosenbaum said.

About 70% of the donations made to campaigns on GoFundMe were under $50 this year, up from 40% in 2019, according to a spokesperson for the fundraising website.

“What we have now is much more collective action,” said Rosenbaum.

Jonathan Cummings, executive director for Revive South Jersey, a ministry started in 2012 to tutor English, mentor and provide housing help in local communities has said “groundswell” of volunteers signed up to deliver food every two weeks after the organization realized that many of the families it supports struggled to afford groceries.

Tuesday donations tracked by Share Omaha, a Nebraska organization that supports local nonprofits, nearly doubled this year from 2019, to over $3 million, with a third coming from first-time donors. When the group asked for volunteers earlier in the year for packing meals for the homeless and other tasks, about 700 people applied, up from the 200 monthly average.

“Even if people are out of work or furloughed, they want to give back to the community,” said Marjorie Maas, executive director for the organization”.

Janette McCabe was one of the hundreds of people waiting in cars before sunrise on the Monday before Christmas in a parking lot in Warren, Michigan, for a Forgotten Harvest food bank distribution.

McCabe and her husband lost their jobs recently and have been relying on food stamps and  has been coming to the food bank distribution for about a month and a half.

“The volunteers are fantastic,” McCabe said. “I don’t know what we would do if we didn’t have them”.