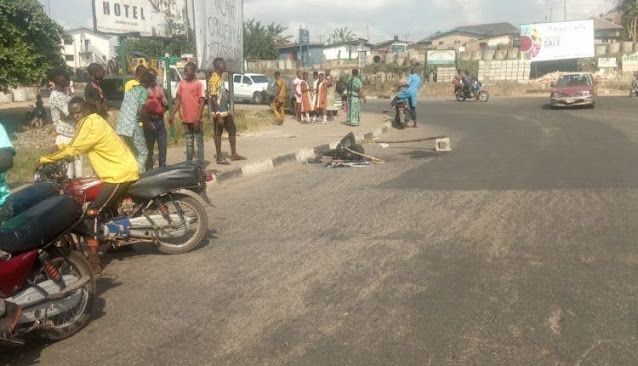 A  man suspected to be a thief, and has stolen a motorbike has been burnt by angry youths

This happened around 7:20 am on Friday, December 4, at the Mile 110 roundabout end of the MKO Abiola Way, Ring-Road, Ibadan.

According to an eyewitness, angry youths chased the two robbers from the Olomi area where they had stolen the motorcycle and eventually caught one of them around 110 Round About, Odo-Ona area of the city. They beat him thoroughly with all manner of harmful objects and burnt him thereafter.

It was gathered that the commercial motorcyclist was shot in motion when being chased by the robbers before youths in the area raised alarm and gave them a hot chase.

SP Olugbenga Fadeyi, the spokesperson of the Police Command who confirmed the incident, said the two robbers had taken the okada from Olomi area of Ibadan and were chased by angry youths down to 110 Roundabout.

“The guys were two. They went and snatch okada (motorcycle) at Olomi area of Ibadan. And they were on the trail, they were caught at that Round About there, 110 Round About, where the mob clamped down on the two of them.” he said.

“One escaped and the other one was not lucky, and they beat him to death. And set him ablaze there. The motorcycle has been recovered to the Oluyole Police station and the Divisional Police Officer ( DPO) is making frantic efforts to meet with the Ministry of Environment to evacuate the corpse to the mortuary, while investigation has commenced on the matter.” he said. 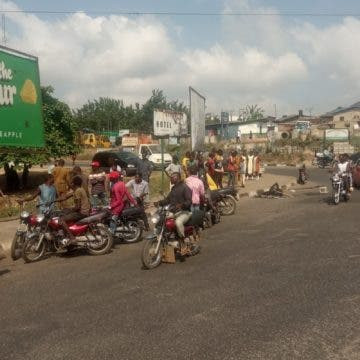