At least nine Syrian Army soldiers were killed on Sunday in an attack on their bus on the main highway in the Central Syrian Desert in the second such incident in less than a week, according to alleged Islamic State rebels, residents and defectors.

Syrian state media announced earlier that six people were killed near Wadi al, without naming them as soldiers. 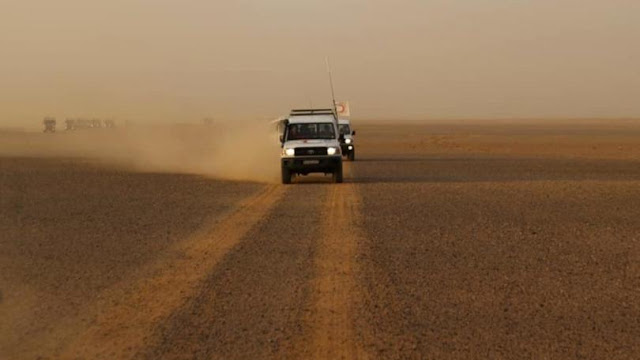 Azeeb in the western part of the Syrian desert known as Badia, east of the town of Hama, while their bus was on the route.

Russian jets operating from a large air base in the region at high altitudes have attacked its vicinity in a surprise assault that left at least twenty two soldiers wounded, some critically, according to two military defectors in contact with their coordinates on the ground.

State media confirmed that twenty-eight people were killed last Wednesday in a related “terrorist” attack on a bus along the main highway in Deir al-Zor, a province bordering Iraq.

Pro-Syrian military backers later reported on social media burning military vehicles in what locals and defectors said was an ambush on buses carrying soldiers returning to their barracks following their departure.

Military defectors offered a higher count of more than thirty killed, claiming they were recruits from the elite Syrian Army of the Fourth Division, which has a strong presence in the rich oil-producing province after the ousting of Islamic State fighters at the end of 2017.A day later, the Islamic State’s Amaq News Agency took responsibility for the ambush, claiming that it killed 40 Syrian army soldiers and critically injured six others.

Western intelligence reports report that there has been an uptick in ambushes and hit-and-run attacks in recent months by remnants of Islamic State rebels who have taken refuge in caves in the largely mountainous, sparsely Syrian Badia.

They also say that in the last few months, Arab Sunni tribes living in the region have been upset by the killings of Iranian Shia militias working in the area of hundreds of Arab nomads accused of belonging to Islamic State militants.