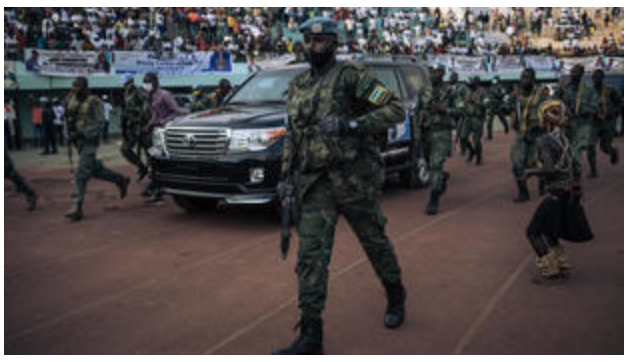 Rebel fighters in Central African Republic attacked and partially occupied a diamond-mining town on Sunday, four security and humanitarian sources said, a day before authorities are due to declare results of the presidential election.

At least five rebels were killed and two army soldiers wounded in the clashes in Bangassou, which lies on the southern border with Democratic Republic of Congo, the U.N. peacekeeping mission MINUSCA said in a statement.

Bozize’s party officially denies he is working with the rebels, but some in the party have suggested they are working together.

After hours of fighting on Sunday, CPC fighters had entered Bangassou by late afternoon, the sources told Reuters, although it was not clear to what extent they were in control of the town. Two

of the sources said army soldiers had taken refuge at the MINUSCA base in Bangassou.

An army spokesman said he did not have information about the

situation in Bangassou. A MINUSCA spokesman was not immediately available for comment.

In its statement earlier in the day, MINUSCA said the rebels attacked Bangassou at around 5:30 a.m. and that its peacekeepers had intervened in support of the army.

It said the fighting had let up at around 10:00 a.m. but that the situation remained “tense”. The CPC also attacked Touadera’s hometown of Damara, about 80 km (50 miles) north of the capital Bangui on Saturday, MINUSCA said.

intimidations and attacks by the rebels kept more than 14% of polling stations closed on election day. Complete results are expected on Monday.

Bozize’s candidacy was rejected because he faces an apprehension warrant and U.N. sanctions for allegedly ordering assassinations and torture while president. Bozize has denied those charges