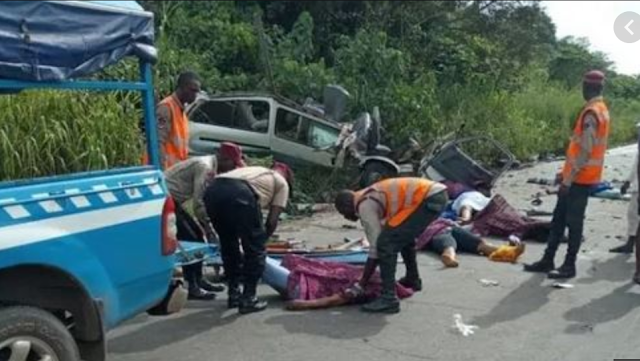 No fewer than four passengers traveling for the Yuletide celebration on Thursday lost their lives in a fatal road traffick accident along the Benin -Ekpoma-Abuja highway, in Edo State.

The crash which occurred near Obagie community, in Uhunmwonde Local Government Area of the state, involved an 18-seater commercial bus, a truck and a Toyota Sienna bus.

Other passengers were said to have also sustained severe  injuries in the process.

According to a passenger who was traveling in the Toyota Sienna bus behind the Ekpoma-bound bus, the bus driver was trying to avoid a pothole on the road when it had a head on collision with a truck loaded with baskets of tomatoes, coming from the opposite direction.

He explained that following the crash, the bus fell on the road, while the Sienna ran into it.

He attributed the crash to over-speeding and dangerous overtaking on the part of the commercial bus driver.