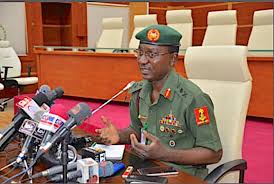 The Nigerian army has told BBC Focus on Africa that 333 boys are still unaccounted for after an attack on a boarding school in Katsina state, but had said  “common criminals” are to blame rather than Islamists.

About 800 pupils were enrolled at the Government Science Secondary School for boys in Kankara town.

“We increased our deployment in the whole of that area where we have some volunteered information about them,” army spokesman Maj Gen John Enenche also told the BBC.

Earlier, the Nigerian presidential spokesman, Garba Shehu, said he believed just 10 children were still being held. Many may simply have fled.

Maj Gen told the BBC that lot of students “ran out of the school into the surroundings. Of course the raiders still went ahead to kidnap some of them”.

Armed groups often kidnap people for ransom in north-western Nigeria. But so far no group has claimed responsibility for the attack on Friday, or demanded ransom.