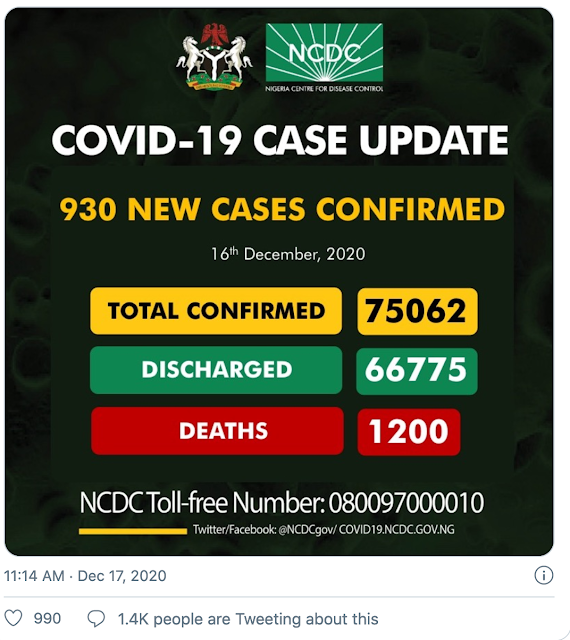 The daily coronavirus infection count in Nigeria reached a new record high on Wednesday, with over 900 cases confirmed across 21 states and the federal capital territory (FCT).

In its report for December 16, 2020, the Nigeria Centre for Disease Control (NCDC) confirmed 930 new cases.This is the greatest number of infections recorded in a single-day count since the first case was confirmed on February 27, 2020. The increase comes four days after the previous peak figure of 796 cases in Nigeria.

With the latest cases, the overall number of confirmed infections in the world has now reached over 75,000. Based on the breakdown, with 279 new positive tests, Lagos reported the most cases; FCT was next with 179, while Plateau was third-highest with 62 infections.Although no new deaths were reported on Wednesday, leaving the death toll at 1,200, the number of active cases rose within one day from 6,348 to 7,087.Meanwhile, with 281 patients discharged on Wednesday, the country reported a small improvement in its daily recovery count.The latest number of discharged patients included “106 community recoveries managed in accordance with guidelines in Lagos state.”75,062 out of more than 850,000 tests tested were found to be positive, but 66,775 patients recovered.