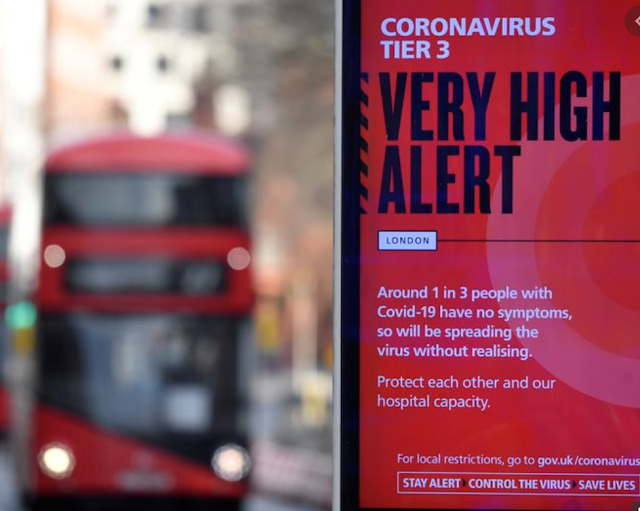 A woman receives a Pfizer/BioNtech jab in England

The World Health Organization (WHO) has said it is in “close contact” with UK officials over the emergence of a new variant of Covid-19.

The new variant is spreading more rapidly than the original version but is not believed to be more deadly.

To curtail the rapid spreading of the virus, some parts of south-east England, including London, are now under a new, stricter level of restrictions.

The Netherlands banned UK flights because of the new variant.

The Dutch government said, the ban was announced on Sunday and will remain in place until 1 January at most.

The move comes after examining a case in the Netherlands earlier this month revealed the same strain of coronavirus as that found in the UK.

Pending “greater clarity” on the situation in the UK, it said “the risk of the new virus strain being introduced to the Netherlands should be minimised as much as possible”.

The Dutch government also said it would work with other European Union member states in the coming days to “explore the scope for further limiting the risk of the new strain of the virus being brought over from the UK”.

The WHO tweeted that it was in contact with UK officials over the new variant.

It said:” The UK was sharing information from ongoing studies into the mutation, and that the WHO would update member states and the public “as we learn more about the characteristics of this virus variant [and] any implications”.

“The new variant may be up to 70% more transmissible than the old one”.

“There is no current evidence to suggest the new variant causes a higher mortality rate or that is affected any differently by vaccines and treatments”,the officials said.

“I think this is a situation which is going to make things a lot worse, but there are some really optimistic things if you look once we get the vaccine out, assuming the vaccine works against this, which at the moment is the working assumption,” said England’s chief medical officer.