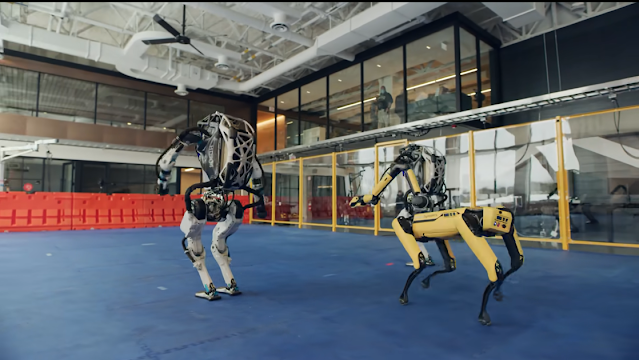 Lulling humanity into a false sense of security

We’ve been slowly watching the evolution of the Boston Dynamics robots, from drunkenly stunning to acrobatic feats. Now, the company’s machines have put on an end-of-year dance that is both astounding and slightly frightening to those waiting for a robot uprising.

In the video posted on Tuesday, we see the entire Boston Dynamics lineup performing some fantastic moves and choreographic sequences to Do You Love Me by The Contours. Leading the show are two Atlas robots, joined by the canine-like Spot and the box-stacking Handle.

After the original versions struggled to put one foot in front of the other without falling over, the five-foot Atlas bipedal showed off its parking and backflipping skills in 2017, graduating to jump over logs, and performing gymnastics last year.

Spot is another famous Boston Dynamics creation. The Massachusetts State Police Bomb Team is just one of a few organisations and companies to use the robot, which was sold earlier this year for a $74,500 wallet.

Finally, there’s Handle, who gets her name from being able to move boxes around warehouses independently. It looks pretty freaky, but not as bad as the original “nightmare-inducing” design. It reminded me of the Wheeler from Return to Oz.

“Our whole crew got together to celebrate the start of what we hope will be a happier year,” the company writes. “Happy New Year from all of us at Boston Dynamics.”

This isn’t the first Boston Robotics dance show. Spot showed his solo skills to the tune of Uptown Funk in 2018.

Earlier this month, Hyundai confirmed its acquisition of approximately $880 million of Boston Dynamics. The carmaker agreed to purchase an 80 per cent stake, with the current owner, SoftBank, who purchased it from Google in 2017, retaining a 20 per cent share.