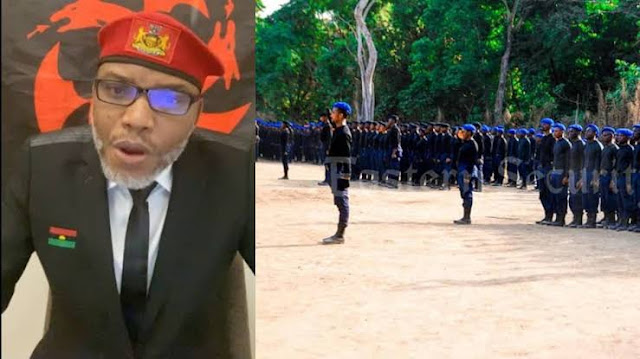 Kanu made the statement while accusing the Department of State Services, DSS, of creating the Igbo Elders for Peace and Development, IEPD, to underestimate the Eastern Security Network, ESN.

Recall that Kanu had recently launched the ESN to curtail the insurgency in the the Southeast.

A statement by Powerful reads partly:

“We the Indigenous People of Biafra (IPOB) under the command and leadership of our great Leader and liberator of our time, Mazi Nnamdi Kanu, wish to bring to the attention of the entire world that the group called Conference of Igbo Elders for Peace and Development (CIEPAD) that made the purported frivolous remarks against the newly created Eastern Security Network ESN is fake and non-existent”.

“The faceless IEPAD is but only a creation of the the Department for State Services, DSS, meant to create confusion and deceive gullible members of the public”.

“We wouldn’t have dignified the amorphous group with a response but for the purpose of setting the records straight. We therefore, wish to inform the general public that the above named group does not exist and has no place in our land. Members of the public should disregard any statement coming from such fake, non-existent groups”.

“This poor script by the DSS is confirmation that the launch of ESN is a nightmare to the Janjawed Fulani controlled Federal Government because their carefully laid out plans to take over Eastern region has failed woefully”.

“Well meaning individuals and groups like Afenifere, the leading socio-cultural organization in Nigeria have already hailed the formation of ESN. Easterners both home and in the diaspora have also continued to send goodwill messages over this uncommon feat. Even the usually frightened National President of Ohanaeze Ndigbo, Chief Nnia Nwodo, has grudgingly offered his support to the security outfit”.

“This is the only reason the security agencies who are already jolted by the outpouring of commendations trailing the formation of ESN from across the world is making frantic but belated efforts to discredit ESN using faceless groups. This lame strategy is not new to us”.

“DSS should stop dissipating energy trying to discredit ESN because it was borne out of the people’s yearnings for security. The outpouring of commendations on the social media is overwhelming. ESN is fully rooted in the two regions of South East and South South for the protection of our mothers, wives, sisters and children who are being dehumanised, raped, and killed at will by Fulani herdsmen and terrorists”.

“We wish to restate again that ESN is a child of necessity born to eradicate terrorism and criminality in Biafra land, and it has come to stay. It’s not targeted against law abiding citizens but only after criminal elements and terrorists in our land. No amount of blackmail can make our people to stop applauding the courage of IPOB leader in floating the security outfit.”