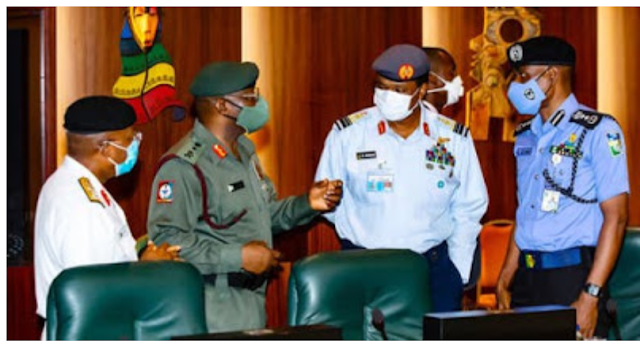 The Governor of Sokoto State, Aminu Tambuwal, has asked the military chiefs to act honourably by resigning their appointment amid the worsening insecurity if President Muhammadu Buhari refuses to sack them.

”He stated further that the Buhari-led Federal Government should admit failure in the area of security, noting that governing the country and protecting lives and property is not rocket science”.

Adebanjo argued that the President should also have resigned given the way the insecurity problem had festered under his watch.

Speaking at a webinar organised by the Emmanuel Chapel, themed, ‘Rebuilding our lives: A case for hope and determination to succeed, Tambuwal explained that it was ironical that security agencies were short of personnel even when millions of Nigerians ready to serve were roaming the streets.

The webinar was also attended by banker and former President of the Nigerian Stock Exchange, Mr Aigboje Aig-Imoukhuede; a former Vice-President of the World Bank, Mrs Oby Ezekwesili; former Emir of Kano and ex-governor of the Central Bank of Nigeria, Lamido Sanusi, and legal practitioner, Prof Konyinsola Ajayi (SAN).

There have been calls from different quarters, including the National Assembly, for the removal of the service chiefs, comprising the Chief of Defence Staff, General Gabriel Olonisakin; Chief of Air Staff, Air Marshal Sadique Abubakar; Chief of Army Staff, Lt.-Gen. Tukur Buratai and the Chief of Naval Staff, Vice Admiral Ibok Ekwe Ibas, given the rising insecurity in recent times.

For example at leasdt 43 farmers were killed by Boko Haram insurgents in Zabarmari village in the Jere Local Government Area of Borno State on November 27.

Among several other attacks on innocent citizens in addition to kidnapping, banditry and armed robbery that have become prevalent across the country, over 300 pupils were kidnapped in Kankara, Katsina State on December 11.

Speaking on the issue of insecurity at the webinar, Tambuwal said, “As far back as June 2018, I made my opinion known about our service chiefs and the Inspector-General and I called for the rejigging of the security architecture”.

“There is definitely a need for the service chiefs to go, either they are asked to go by the President who appointed them or by themselves being honourable enough to say we have done our best. It’s clear; even the Commander-in-Chief has said it not one or twice that their best is not enough”.

“They should be honourable enough to say, Mr President, we have done our best, our best is not enough, you have adjudged our best not to be good enough, we take a bow, appoint a new set of people that would take charge”.

“No one of us is indispensable. No single individual has the monopoly of knowledge of how to address the challenges we are facing as a nation, more so with insecurity, especially with the fact that they have been tested over the years. The same set of people and we have seen the outcome of their efforts.”

He also spoke on how the Federal Government had managed the security situation, saying ”leadership entails taking critical actions to address emerging challenges”.

He said, “We must as a leadership admit that we are failing, and in this case, I mean the centre is failing in providing that leadership.”

Tambuwal, who is also a former Speaker of the House of Representatives, explained that security agents should be equipped with the proper weapons, good remuneration, the right technology and possible collaboration with other countries.

He added, “It is not rocket science; it can be done. We need to recruit more hands and there are many patriotic Nigerians, eminently qualified, able-bodied people that are ready and willing to serve this country in our security agencies. We know Nigeria is under-policed, so what is difficult in employing more hands?”

He pointed out that there had been a cordial relationship with security agencies in the state, adding that intelligence sharing among them and the support from the state government had helped to reduce crime in the state.

He added, “They have been working together in synergy in Sokoto, unlike what is happening at the national level, and we know that there is no synergy among the heads of the security agencies. They are not working together.”

He argued that insecurity had worsened, especially in northern Nigeria, because most of the countries sharing borders with the region such as  Cameroon, Niger Republic, Chad, have “serious insecurity problems.”

Calling for the reduction in the cost of governance, he said it should be holistic and cut across all levels of government and arms of government.

Also, in an interview with one of our correspondents on Friday, Adebanjo, who is a leader of the Yoruba socio-political group, Afenifere, lamented the worsening insecurity in the country, while calling on the service chiefs to resign if the President is reluctant to sack them.

Adebanjo said, “There is no question about this. Even him (the President) should have left (office) too considering the state of insecurity in the country. Despite the fact that people are saying they are incompetent, he kept them there (in office)”.

“People who are not saying this are not saying the truth. They (service chiefs) should have resigned. They should resign. There is no improvement in security. There is evidence of failure and incompetence. People are dying every day and they keep incompetent people there (in office).”

Mohammed, who is the convener of the Coalition of Northern Politicians, Academics, Professionals and Businessmen, told one of our correspondents in a telephone interview that he aligned with Tambuwal’s position”.

He said, “I agree with Governor Aminu Tambuwal totally and entirely; these people should simply resign. It is clear that they have run out of ideas. Even from their manner of appointment, it is only President Muhammadu Buhari who can tell you why he appointed them and why he is keeping them because they weren’t the most qualified at the time they were appointed”.

“These groups have information about individuals being considered for such appointments that the President may not be aware of. It is evident that these appointees have nothing fresh to offer as they are clearly overwhelmed by these security challenges.”

Yakasai, who is a founding member of the Arewa Consultative Forum, also said, “I certainly support any call that will better our security situation. We are certainly on the edge and the security of lives and property is seriously in jeopardy”.

“Apart from the service chiefs who I believe are still enjoying the perks that come with their offices, the pressure should be directed at the President who has the powers to hire and fire them. It is he who has the task of sending them away.”

He said, “Tambuwal’s call is just advisory. It is left for the service chiefs to take the advice or reject it, but the governor cannot direct or compel the Presidency to act in line with what he thinks.

“Resignation from office is not our culture. We have not acquired that culture, so hiring and firing belongs to the boss. When we get to that point people will begin to ask for it. Even those in lower positions than the President who have not performed also should resign when we acquire such culture.

“However, we should not put all the blame of the worsening insecurity on the military. Even Nigerians share in the blame. We are not security conscious, otherwise, we will be able to help the security agencies to perform their role because the security agents cannot be everywhere.”