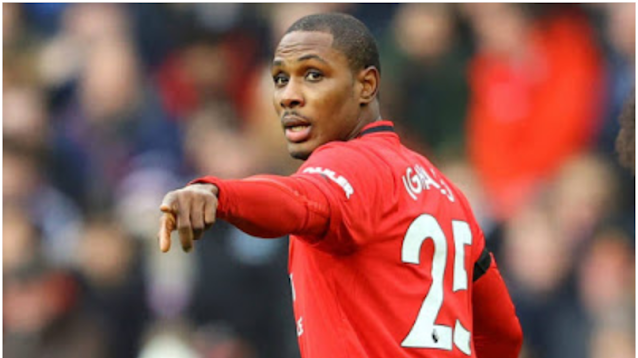 Manchester United forwards, Odion Ighalo, has revealed that he was unclad in bed trying to sleep when he got a call about his move to the club a year ago.

Former Nigeria International recalled how he ran around a hotel in Shanghai after being told that Ole Gunnar Solksjaer’s side wanted him.

Ighalo signed a six-month loan agreement with the Red Devils back in January 2019, which was then extended for another six months.

“I said ‘what club did you just mention?’ and he said ‘Manchester United’. Since that day he mentioned this name I did not sleep. He said I wasn’t the only option as they have four or five other options.”

The former Super Eagles star said he prayed every night asking God not to allow United to take any of the other strikers but him.

He said a day before the transfer window was shutting down, his agent called him again saying the United were interested having failed to secure their other targets.

“I remember I was naked in bed trying to sleep when I got the call [from my agent] and he told me to get up and get changed.

“I ran out of my room and knocked on my director’s door, he couldn’t speak English, so I went to the translator and he said ‘what’s going on?’” He added.

According to the former Watford front man, United sent the offer and his agent showed him the offer and he saw the club’s logo on headed paper, noting that he was shivering and praying that the deal happened.

“They then they negotiated, talked about the contract, my head was heavy. I was panicking, looking at the news, wanted to see what was going on,” he said.

Ighalo said about 6am when he got the message saying the contract signing was successful, he was lying in bed, crying and calling his mother.