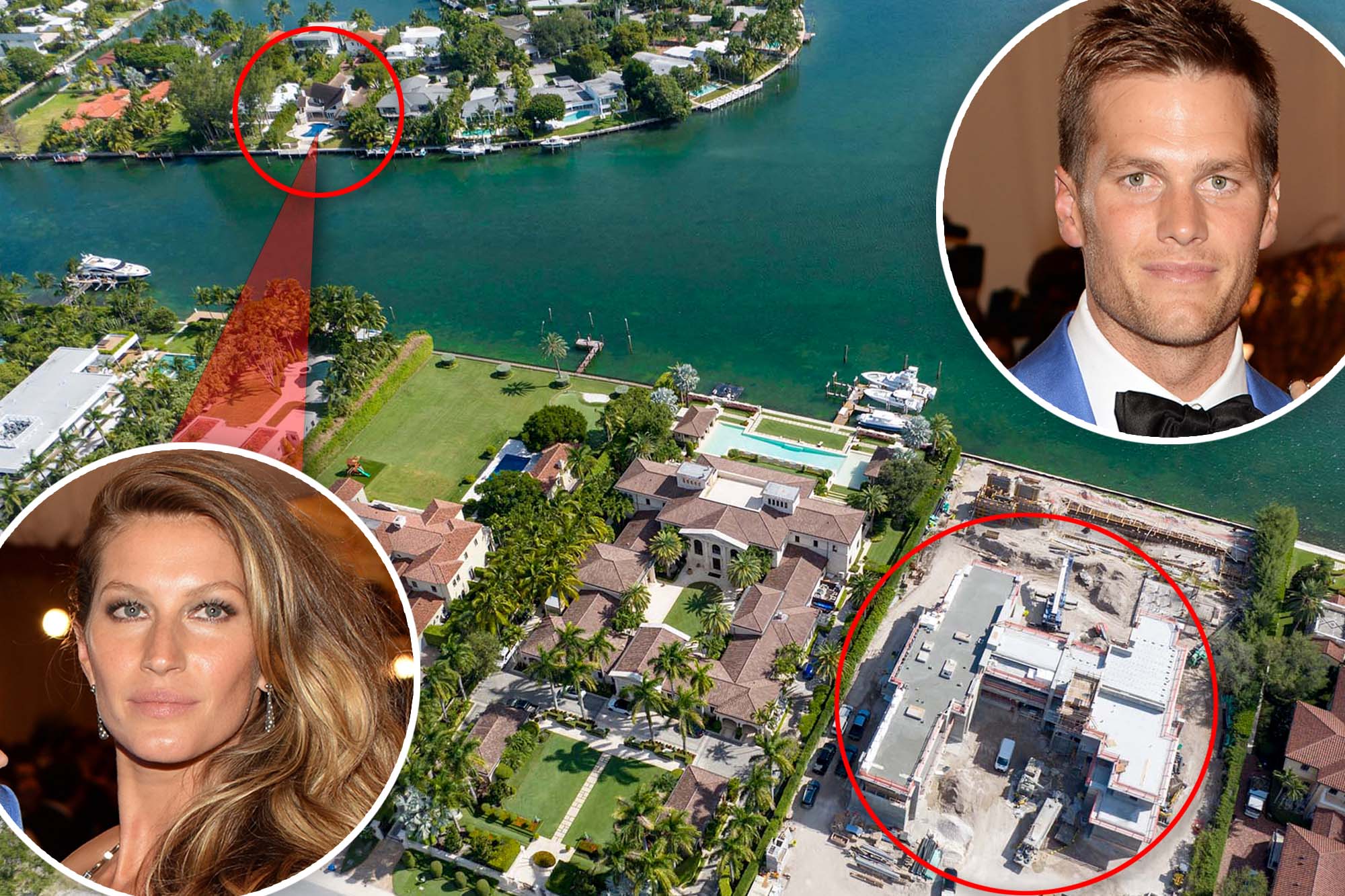 The supermodel splurged on a stunning five-bedroom, 6,600-square-foot home on Indian Creek Island with a nearly direct view of the Tampa Bay Buccaneers quarterback’s under-construction mansion.

Bündchen first viewed the mansion on Aug. 16, just days before Brady’s shocking 11-day break from the NFL, which was said to be a last-ditch attempt to save their troubled marriage. On October 6, she closed on the property.

“Gisele was actively looking at homes in Miami Beach even before Tom took his break from the NFL, which indicates that she was already done with the marriage and moving on,” a source tells Page Six. Gisele Bündchen’s new $11.5 million mansion is within sight of ex Tom Brady’s under-construction home on Indian Creek near Miami Beach.MEGA for NY Post

Brady’s in-the-works mansion has a waterfront view of Biscayne Bay, while Bündchen’s new home is in Surfside, almost directly across the narrow waterway also known as Indian Creek.

“You could literally swim from Gisele’s place to Tom’s — not that they would — but both homes will include a dock, so it would be very easy for them to co-parent their children while living so close to each other,” the source tells us. Bündchen’s new mansion is almost directly across the waterway from Brady’s place.MEGA for NY Post

The former couple will share joint custody of their kids following their Oct. 28 divorce.

Bündchen’s home sits on a 18,400-square-foot waterfront plot. The property listing states it has soaring 25-foot ceilings, numerous terraces and views of a wide waterway plus Indian Creek Island. It features five bedrooms and seven bathrooms. 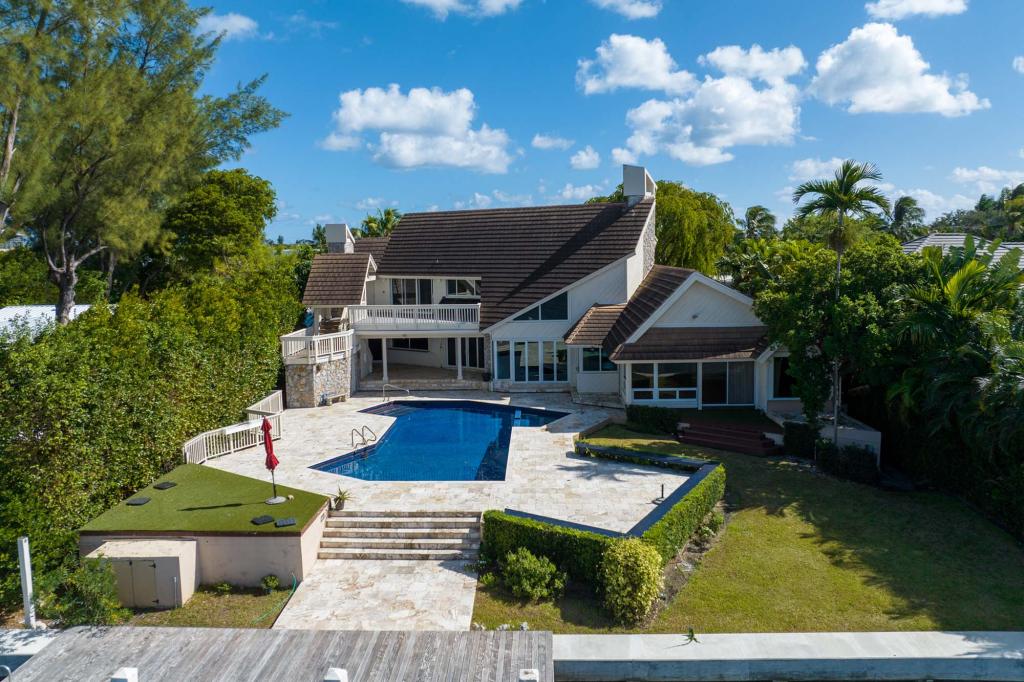 It also has a large outdoor pool, home theater, office, gym, playroom and an eat-in kitchen that opens up to a patio. The master bedroom is on the ground floor and features his-and-hers baths. It is located on a private cul-de-sac, offering Bündchen, 42, and their kids, Benjamin, 12, and Vivian, 9, more privacy. (The athlete also shares son Jack, 15, with ex Bridget Moynahan.)

Brady, 45, is believed to be keeping their property on Indian Creek Island — also known as the Billionaire Bunker, an exclusive enclave of wealthy residents including hotel magnate Jeffrey Soffer, Ivanka Trump and Jared Kushner and activist investor Carl Icahn. 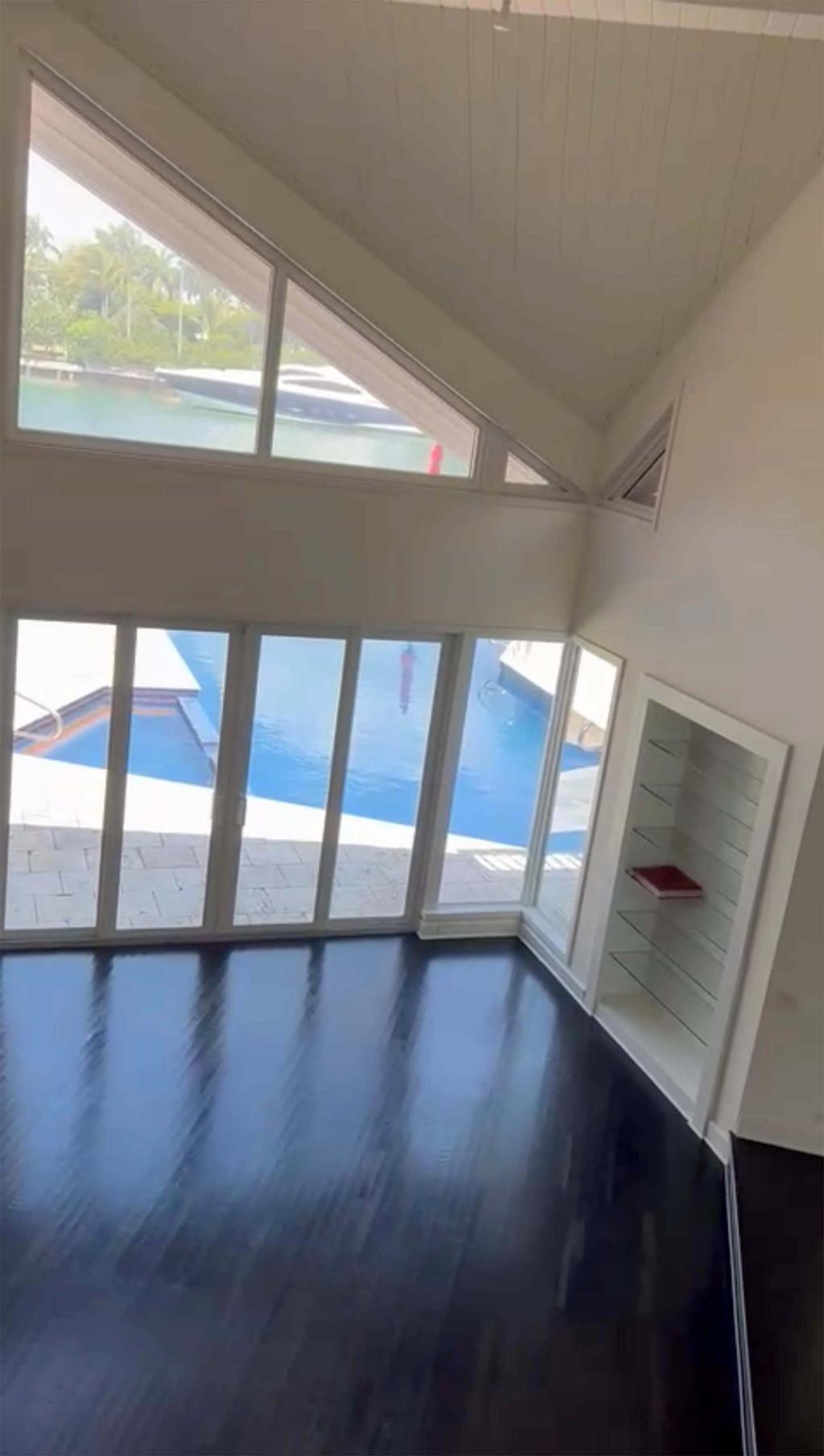 The property features soaring ceilings and views of a pool and Indian Creek Island.

The NFL player and his now-ex-wife purchased the $17 million plot of land on Billionaire Bunker in late 2020. They then tore down a 5,772-square-foot home on the lot and began building an eco-friendly mansion in its place.

The property remains under construction. 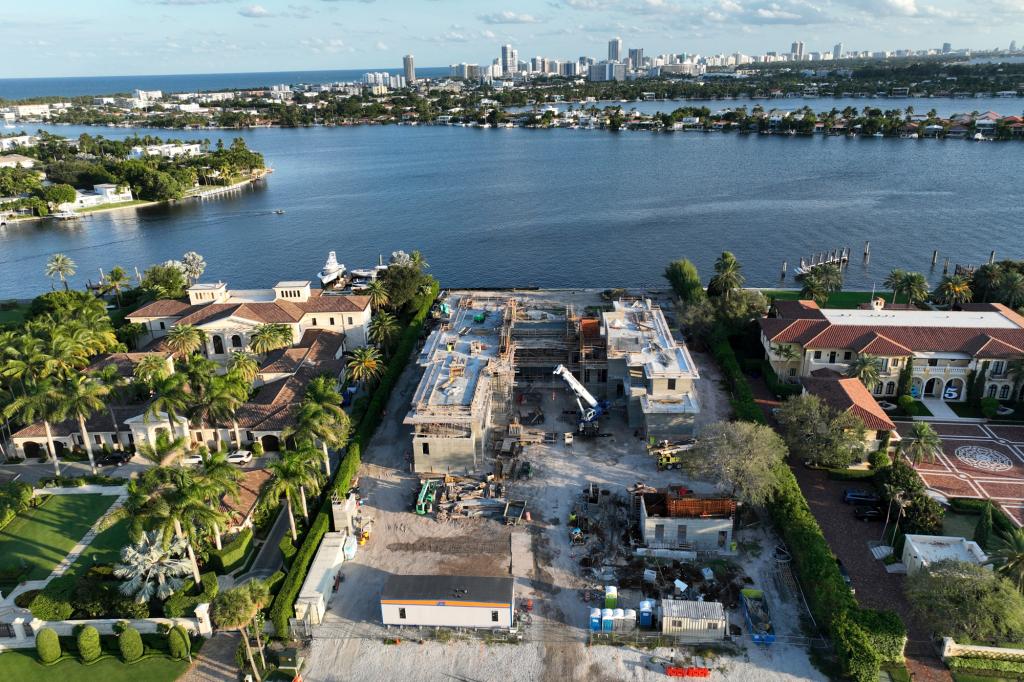 Brady is believed to be keeping the under-construction property he and Bündchen bought on the Billionaire Bunker.

Meanwhile, sources say Bündchen — who this week was spotted vacationing in Costa Rica with their children — has been recently staying at a rented property in Miami while she gets her new homes ready. 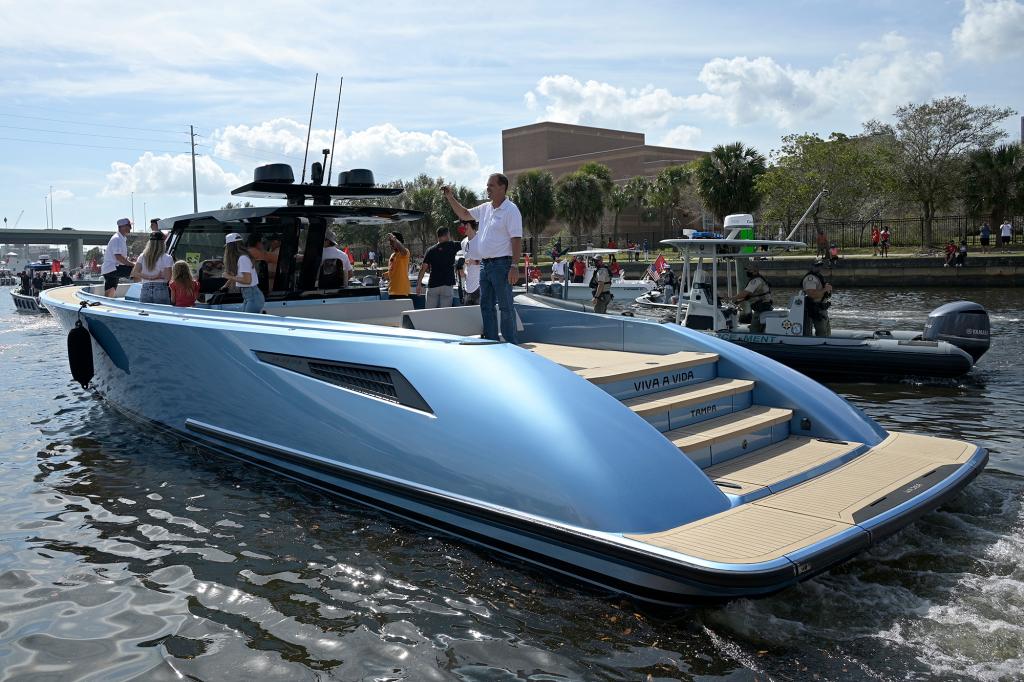 Brady stood at the console of his boat while celebrating the 2021 Super Bowl 55 victory in Tampa, Fla.

It is believed she will carry out a dramatic renovation of the new Surfside mansion to put it on par with her other properties, which have always been eco-friendly.

The move comes after The Post last month confirmed Bündchen purchased a modest $1.25 million property also in the Surfside area. 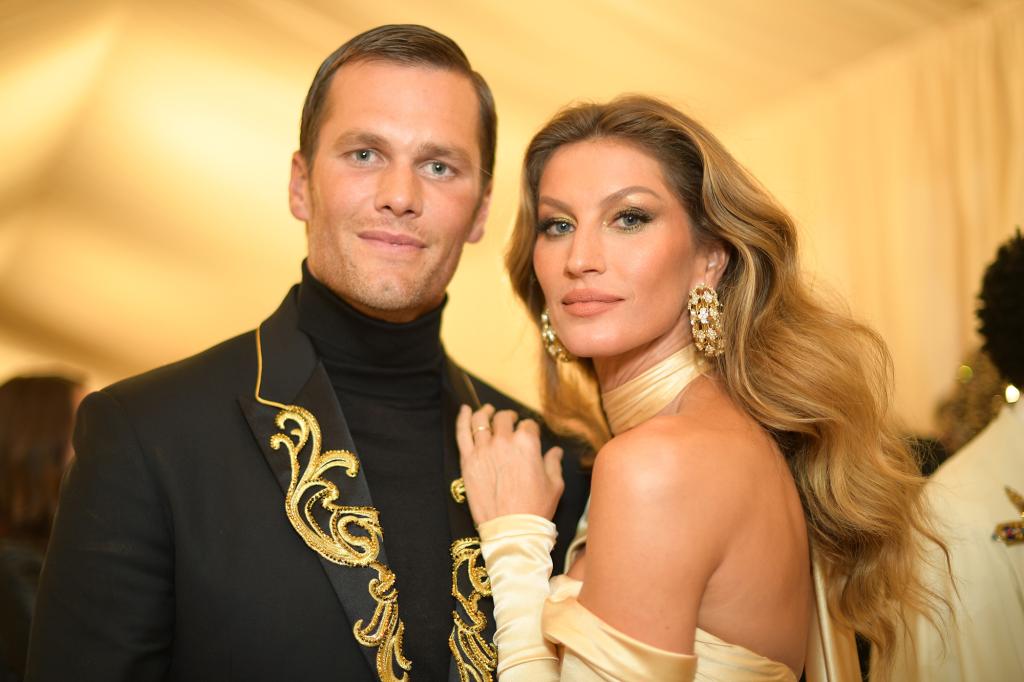 The former couple, pictured here at the 2018 Met Gala, plan to live near each other in the Miami area to co-parent their two kids together.

Getty Images for The Met Museum/

She closed on the three-bedroom, three-bathroom, Art Deco-style cottage on Feb. 28 and then submitted plans to remodel the property.

It is only half a mile from her new, much larger mansion, and it is believed the cottage will be used as an office or possible staff residence. Earlier this year, Bündchen closed on a more modest $1.25 million property in Surfside, which she will likely use as an office space. She has already submitted plans to remodel the home.LCD / SplashNews.com

Bündchen filed for divorce from Brady in Glades County, Fla., on Oct. 28 after 13 years of marriage and 15 years together. He did not contest the filing, and the dissolution of their marriage was finalized the same day.

The former Victoria’s Secret Angel wrote on her Instagram Story, “My priority has always been and will continue to be our children whom I love with all my heart.

“We have grown apart and while it is, of course, difficult to go through something like this, I feel blessed for the time we had together and only wish the best for Tom always.” The former couple now have multiple properties in the Miami area.gisele/Instagram

Brady said in a statement of his own that they made the “painful and difficult” decision “after much consideration.”

“We only wish the best for each other as we pursue whatever new chapters in our lives that are yet to be written.”