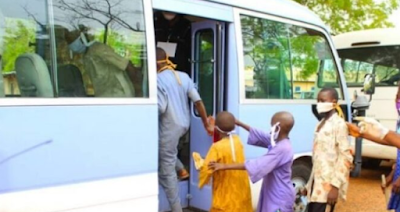 Abdullahi Ganduje, governor of Kano, says that most of the almajiri children who walk the streets in the northern part of the country are not Nigerians. Speaking at a retreat organised by the Universal Basic Education Commission (UBEC) in Kano on Monday, Ganduje said the survey showed that most of the Almajiris come from the Republic of Niger, Chad and Cameroon.He said that free and compulsory primary and secondary education, as well as the transformation of the almajiri education system, were some of his key goals in the education field.“From the survey we conducted, most of the almajiri in our streets are from Niger, Chad and the northern part of Cameroon,” Ganduje said.“As soon as you increase the standard of the almajiri education system, you are inviting other almajiri from other places to come to your state. That’s just another problem.

“The northern governors are putting more pressure toward having a universal legislation that will limit the migration from one state to another.”

Under the theme “Enhancing basic education in Nigeria towards robust institutional strengthening and effective stakeholder engagement,” the governor said the retreat was very important particularly at this time when the country is gradually emerging from the COVID-19 pandemic that has affected the education sector. He also said that the retreat was important because it occurred at a time when education was the first victim of an unregulated population, particularly when it was not accompanied by adequate economic growth.Hamid Bobboye, Executive Secretary of UBEC, also said the retreat was aimed at providing the board and management with an opportunity to brainstorm, share ideas and strategies to move basic education forwards.

“This retreat could not have come at a better time than now when Nigeria and, indeed, the entire world, is facing a common enemy – COVID-19.

“The pandemic is serving as an eye-opener for all stakeholders in basic education.”

In April, as part of efforts to minimise the spread of COVID-19, governors across northern states decided to ban the almajiri scheme and relocate the affected children to their parents or countries of origin. Some of the northern states, including Kaduna, Nasarawa and Kano, sent Almajiri children back to their home countries earlier this year.