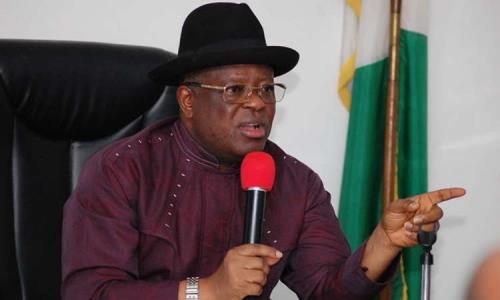 Ebonyi State governor, David Umahi on Monday had  said he did not give N3 million to pacify notorious cult groups reportedly terrifying people residing in the state.

Umahi said this when the 13 Local Government Area Chairmen, Coordinators of Development Centres, with their Management Committee members, among other political appointees paid him a solidarity visit at the Government House, Abakiliki.

He dismissed the report that he gave the money to the groups through his security aide.

According to him, he had declared  a hunt for members of the groups.

“How can a warrior such as me bribe cultists, to do what with the money? The duty of political leaders and the citizens is to give me the names of the cultists because I will give them a bad Christmas celebration”.

“I am searching for them whether they are in government or not because the matter is that of terrorism and would be handled at Abuja,” Umahi said.

Thereafter, he begged the political leaders to discontinue their plan to recall some members of the state House of Assembly and National Assembly, who stayed back in Peoples Democratic Party after his defection to the All Progressives Congress (APC).

“We would allow the people who did not defect to the APC with us to exist in peace and you should not victimise them”.

“You should not close the door behind them because they will come back but ensure that you enjoy your palliative in their presence to make them salivate”, Umahi said.

He thanked them for their unanimity and sharing his political ideology, saying that the dividends of the defection had yet to be felt.

“When we started this struggle in 2014, we were not up to five percent of the mammoth crowd we are witnessing presently”.

“You then imagine what will happen presently that we have the grassroots, structures at the state and national levels”.

“Several personalities higher than myself have defected without noise, so one wonders why this particular defection is generating so much noise,” Umahi said