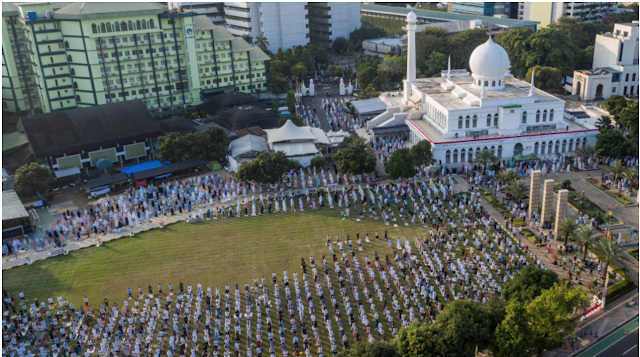 Indonesia could receive over a billion from the Trump administration should it be in peace with Israel, US International Development Finance Corporation Chief Executive Officer Adam Boehler told Bloomberg while in Israel.

“We’re talking to them about it,” Boehler told the news agency. “If they’re ready, they’re ready and if they are then we’ll be happy to even support more financially than what we do”

His government agency,  DFC,has  already invested over a billion in Indonesia, according to Bloomberg.  Boehler said that this amount could be increased by “one or two billion”.

Boehler was part of the US delegation headed by White House senior advisor Jared Kushner that visited Israel before going   to Morocco to advance the peace talk between Rabat and Tel Aviv.

In Rabat on Tuesday the DFC pronounced projects worth $5 billion in American investments in Morocco and the region.

Morocco is the fourth country to declare the normalization of ties with Israel under the US brokered Abraham Accords. Sudan has made a similar declaration. The United Arab Emirates and Bahrain have ratified deals with Israel this fall.

Israeli and US officials have spoken of additional normalization deals. Israel’s Intelligence Minister Eli Cohen has a conjecture that Indonesia is among those nations that could sign such a deal with Israel.

The Palestinian Authority has opposed the Abraham Accords holding that the peace talk with Israel should happen only after the conflict with Israel is resolved. It believes that countries who have signed such deals have betrayed the Palestinian cause.

At the UN Security Council in New York on Monday, Indonesia’s  Dian Triansyah Djani said that his country was a strong supporter of the Palestinians.

In Morocco Boehler spoke about the financial impact of deals with Israel, such as the Memorandum of Understanding that was signed between the DFC and the Moroccan government in Rabat.

According to the DFC  the US would now invest $3 billion for projects “in Morocco and in co-investments with Moroccan partners for projects in Sub-Saharan Africa.”

In addition, it launched a 2X MENA initiative to “catalyze $1 billion of investments in projects that advance women’s economic empowerment in the Middle East and North Africa,” the DFC said in a statement it released to the press.

DFC also announced that Morocco would be a hub for its new “new continent-wide Prosper Africa trade and investment program.”

“Morocco’s leadership on the continent combined with its vibrant and growing economy make the country an ideal base for Prosper Africa as well as create exciting opportunities for DFC investment.”

“We deeply value our strong relationship with Morocco, and we look forward to deepening this partnership” he added.