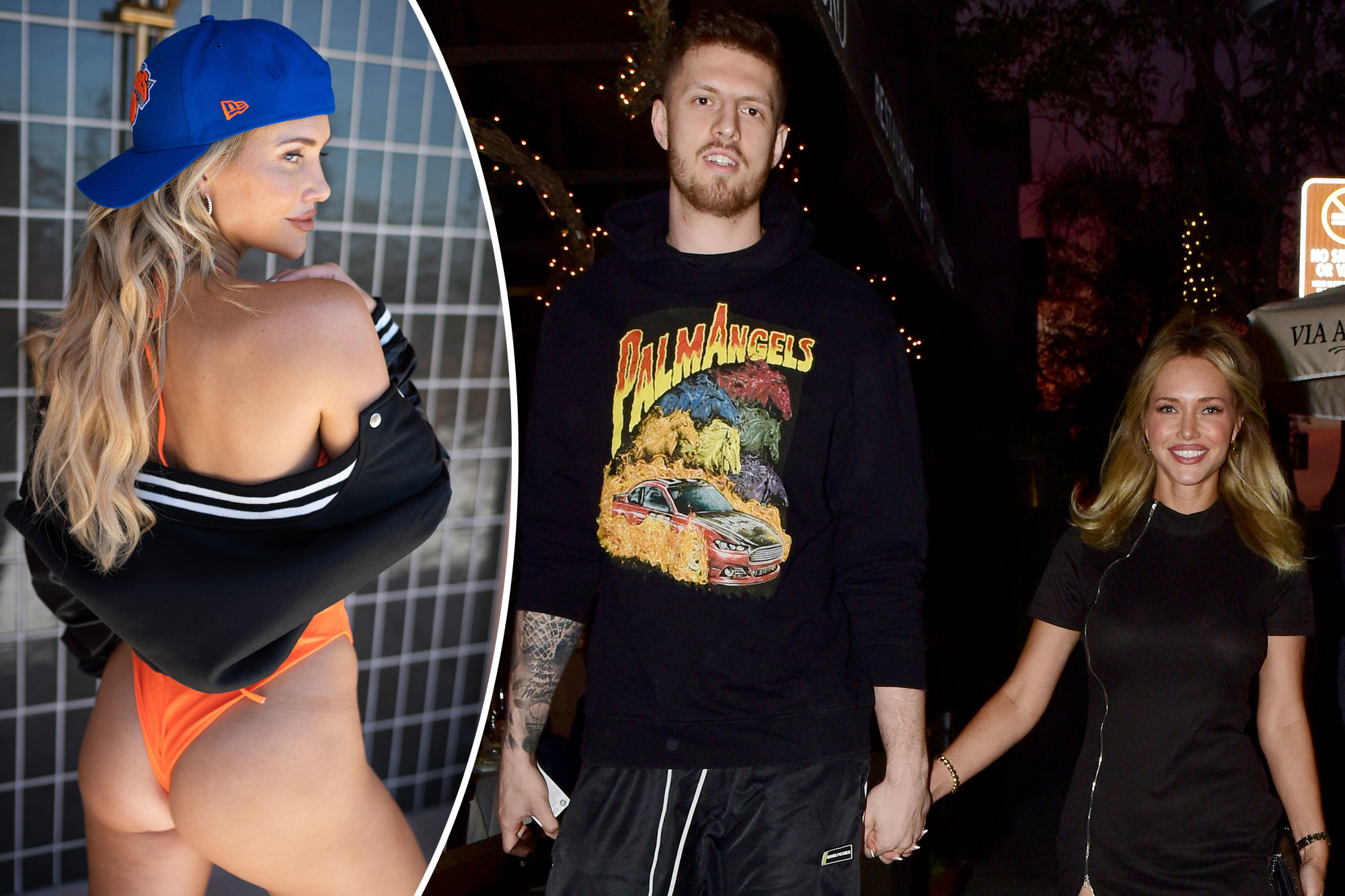 Kourtney Kellar and NBA player Isaiah Hartenstein — the buzzy new member of the New York Knicks — met in 2019 when the athlete slid into her DMs while playing centre for the Houston Rockets.

“Because my Instagram is pretty sexy, I get a lot of compliments on my body, which is nice.” But he came in and said, ‘You have the most beautiful smile,’ and sent me his favourite photo of me from my feed,” Kellar, 31, said.

The blonde model’s Instagram is filled with bikini photos. But what about the image Hartenstein adored?

“I was wearing a turtleneck in that picture,” she said. “It was really sweet of him.”

Now the two are engaged and living in Westchester, near the Knicks’ training facility, with Hartenstein signed to a two-year, $16 million contract with the team.

But it took them a while to get to this place.

When the two met, Kellar, a Texas native and the youngest of three siblings, was living in Dallas and Hartenstein was four hours away in Houston.

“I wasn’t going to go all the way over there because it was way too far, so we started FaceTiming at first,” said Kellar, who was previously engaged to country singer Chase Bryant. After three weeks of hours-long FaceTime dates, “I confirmed he wasn’t a serial killer and we met up at a restaurant. It went so great and I was really excited.”

Though the Dallas area is home, Kellar didn’t thrive there professionally.

“When I was younger, in my teens, I got denied from several Dallas modeling agencies,” she said. Her modeling career didn’t officially take off until she left for Henderson State University in Arkadelphia, Arkansas, where she earned a Bachelor of Science degree in athletic training. “I was a broke college kid and needed money, so I started modeling in Arkansas for brands like Dillard’s and Walmart.”

Kellar had so much fun modeling that wanted to do it “for real” and full-time, so after graduating in 2014, she headed back to Dallas to try her hand at modeling in the Lone Star state one more time.

“I was denied again!” she said.

She didn’t give up, though. “After I moved back to Texas, I signed up for Miss Texas International and won that pageant [in 2017,]” Kellar explained, noting that the title helped open doors for her.

After her country-wide tour as Miss Texas International, Kellar became one of Supercross’ racing’s Rockstar models and a Tecate ring girl.

“My first fight was Canelo [Álvarez] versus GGG [Gennady Golovkin II] in Las Vegas,” she said of the highly publicized 2018 boxing match. “All of these opportunities helped build my portfolio, network and social media presence.”

Before long, she had more than 700,000 Instagram followers, and when she and Hartenstein moved to Los Angeles in 2021 — after he joined the Clippers — she signed with Lipps LA modeling agency. in 2021 when Hartenstein joined the Los Angeles Clippers and the pair moved there.

“I did really well this year in the Miami market for Swim Week, I think. I really do love shooting swimwear, but I’m looking forward to New York, where I can explore more high fashion and editorial beauty opportunities,” Kellar said.

She doesn’t even mind not being in the fashion capital of Manhattan, because of how many Knicks’ players and their wives and girlfriends live in or around Westchester.

“I always try to become friends with the players on the team. It’s just hard because they get traded often, but we stay in touch and keep each other’s numbers,” Kellar said.

Her NBA WAG pals include Briona May, the girlfriend of Los Angeles Clippers’ point guard Eric Bledsoe. “She is delivering twin baby girls soon who I can’t wait to meet,” Kellar said.

And Kellar has always been an avid fan. “Basketball is my favorite sport. I was a huge Dallas Mavericks fan growing up,” she said. “My dad took me to games all the time as a kid.”

Kellar added, “One of the things on my bucket list is I want to be that typical old lady dressed to the nines sitting courtside at games. I’m not an old lady yet, but I am definitely enjoying dressing up and going to games.”

Though she doesn’t make it to every away game because “Isaiah is focused when he’s on the road and he is locked-in during games,” Kellar is OK with that.

“I would rather be working than traveling several times a week to be there because he’s so zoned in,” she said. “I love him, but it works out when we get to miss each other for a bit.”

And she plans to go to as many home matches as possible. The Knicks’ home opener at Madison Square Garden is Oct. 21 against the Pistons.

Plus, now that they’re engaged, Kellar and Hartenstein have their whole lives to be together. “He really got me with the proposal,” she said. “I was not expecting it at all, if you can believe it.”

Kellar said she had had been “bugging” him for months to do a photo shoot with her but Hartenstein always said no because he was too focused on work.

“But when his season with the Los Angeles Clippers ended [in April, he said, ‘Fine. I’ll do one shoot with you, but enjoy it because it’s all you’re getting.’”

The athlete also had one odd stipulation: “He was really insistent that he get to pick the photographer,” Kellar said. He went with the team’s photographer, Isaiah King, who took them to beach in Malibu, Calif.

“Isaiah said he wanted a couple solo shots of me, which I thought was weird since the shoot was supposed to be for us, but I agreed,” Kellar recalled. As she was facing away, fixing her hair and perfecting a pose, Isaiah was behind her on one knee holding an oval-shaped diamond.

“I ugly cried,” Kellar said. “I couldn’t believe it. I had never been happier and I was so surprised.” Shortly after she slid the ring on her finger, she posted a photo of the sweet moment on Instagram with the caption, “Ich hab ja natürlich gesagt,” which means “Of course I said yes,” in German. (Hartenstein, who is German-American, was born in Oregon but moved to Germany at age 10 when his dad, former pro basketball player Florian Hartenstein, joined a team there.)

Kellar admitted that she’s excited for the next big step — both professionally and personally — in New York.

“We are so excited to be joining the Knicks community. We have so much to be grateful for.”