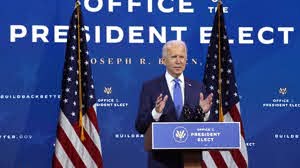 US President-elect, Joe Biden’s margin over the incumbent President, Donald Trump in the nationwide popular vote is now over 7 million a number that might grow as several states continue counting votes.

As of Friday morning, December 4, president-elect Biden had won about 81.2 million votes, while Trump won about 74.2 million.

Trump’s vote count makes him the second-highest vote earner in the history of American politics, While Biden is the president with the highest votes ever.