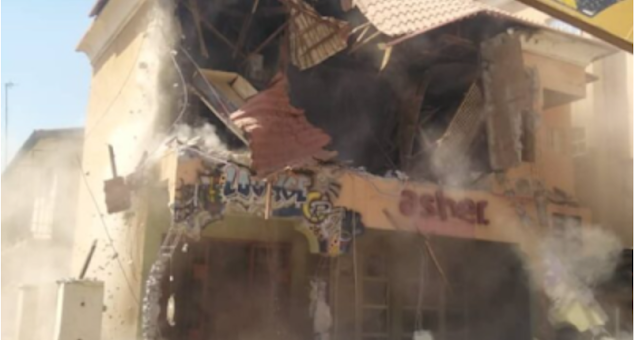 The Kaduna State Urban Planning and Development Authority (KASUPDA) has demolished Asher Hotel in the state city of Barnawa on charges of immorality.

The Department, which is responsible for the planning and growth of all urban areas in Kaduna, announced this in a tweet on Thursday.

We reported that the hotel was the planned venue for a sex party—but there was no information on the proposed location for the party on the flyer attached to the tweet.

According to the flyer, an outside and indoor sex party was set for December 27.

Activities lined up for the event were  games, foods, grills, movies and sex.

“50 ladies ready to get down,” a caption on the flyer read.

Officials of the agency at the hotel before demolition

The state agency said the hotel violated COVID-19 guidelines. It warned that any property used for such immoral act will be demolished.

“KASUPDA have demolished Asher Hotel in Barnawa Kaduna South. Asher Hotel was the proposed venue for the Kaduna Sex Party, the hotel was also caught contravening the Covid-19 guidelines of the state. KASUPDA will not hesitate to demolish properties used for such immoral act,” the tweet read.