Lautaro Martinez scored 3goal in one game as Inter Milan kicked off 2021 in blistering form with a 6-2 win over lowly Crotone on Sunday to take top spot in Serie A. 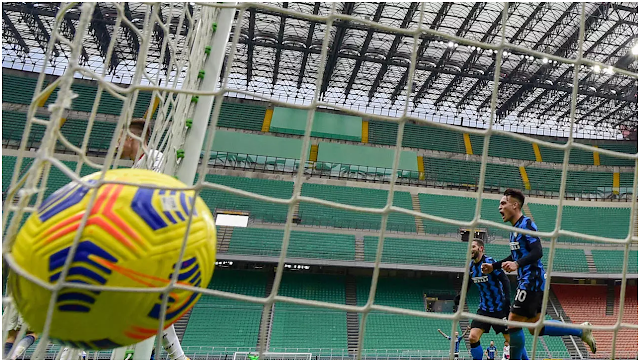 Martinez and Romelu Lukaku proved decisive for Inter, the strike duo being involved in five goals with midfielder Arturo Vidal hauled off at half-time after conceding a penalty in a woeful display.

Antonio Conte’s side had been pegged back 2-2 at the break with Niccolo Zanellato scoring first with a 12th-minute header for the rock bottom Calabrians with the worst attack in the league.

But Martinez picked up a Lukaku cross to pull the hosts level eight minutes later.

Martinez had a role in Inter’s second just after half an hour when Crotone defender Luca Marrone turned the ball into his own net under pressure from the Argentina forward.

“Arturo certainly needs to work and keep his head down, and pedal because he has room for significant improvement,” said Conte of the former Juventus and Barcelona midfielder.

“Here, nobody has a guaranteed place, and he needs to prove that he deserves to play. The up-and-down nature of his performances is something we can’t afford to continue.”

Martinez restored the lead for Inter before the hour connecting with a Marcelo Brozovic through ball following a Lukaku back-heel, and headed in his third with 12 minutes to go off a rebound.

Lukaku blasted in his 50th goal for Inter after 64 minutes but limped off after taking a knock to his right thigh 10 minutes later, before Achraf Hakimi sealed the win with three minutes to go.

“Lukaku told me he had a little fatigue, we’ll see tomorrow if he is at risk for Sampdoria or not. We changed him immediately, it shouldn’t be anything serious,” said Conte.

“We needed to win and start well in the new year,” continued Conte as Inter target their first Serie A title since 2010 with their European campaign over this season.

“There is great desire and it shows. It’s important to continue like this, we produce and create a lot, we score a lot of goals, it’s a pity for the goals conceded.”

Behind the Milan teams, Roma held third place with captain Edin Dzeko scoring with a quarter of an hour to go in a 1-0 win over former Roma coach Claudio Ranieri’s Sampdoria.

The capital side are ahead of Napoli who swept past Cagliari 4-1 with Piotr Zielinski s twice and Hirving Lozano and Lorenzo Insigne also on target late, the latter from the penalty spot.

In a clash of European rivals, Atalanta whipped Sassuolo 5-1 with Colombian Duvan Zapata bagging a brace.

The Bergamo side were again playing without captain Papu Gomez who has fallen out with coach Gian Piero Gasperini.

Zapata and Matteo Pessina scored in the first half with the Colombian adding a second just after the break with Robin Gosens and Luis Muriel compounding the rout before Vlad Chiriches pulled a goal back.

Sassuolo are fifth one point ahead of Atalanta who have played a game less.

Ciro Immobile scored a 15th-minute penalty for Lazio who dropped to ninth after a 1-1 draw at 19th-placed Genoa.

Torino moved off the bottom of the table with their first win in two months, 3-0 at struggling Parma.