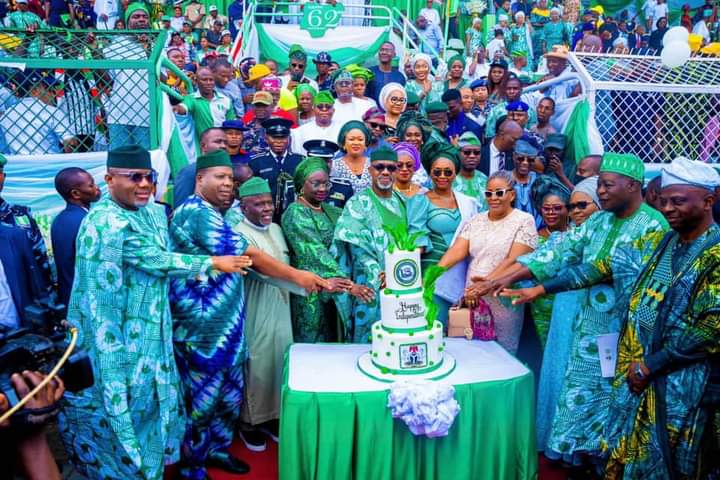 Dapo Abiodun, governor of Ogun State, has urged Nigerians to rise up and address the country’s myriad difficulties, emphasising that no situation is insurmountable.

Abiodun made the announcement at the Foursquare Church’s 67th Annual Convention, which was held at the Church Camp in Ajebo, Obafemi Owode Local Government Area of the state.

He remarked that the nation was facing security concerns such as terrorism, banditry, kidnapping, and cultism, among others, and said that the country could overcome these issues if citizens worked together as one. “Our congregation must be conscientised on this Biblical injunction even as our society is afflicted with all manners of ills ranging from insurgency, kidnapping, cultism, banditry, sexual assaults and a host of others.

“The role of the church as the conscience of the nation is an age-long fact which has become the guiding light for any society that desires development. It is, therefore, imperative that the love of God be extended to all, while people are implored to eschew bitterness.

“More so, the church as an organ of socialization is ever relevant, especially in propagating moral ethics in the society. For this reason, the church is enjoined to work harder in its responsibility by condemning the use of violence by individuals or groups to seek redress as this is enshrined in the Bible”, the governor stated.

He reiterated that his administration would continue to promote inter religious tolerance that exists in the state as well as initiate programmes and projects that would promote mutual understanding and respect for rights of worship of all religious beliefs.

He further enjoined the church to be steadfast in praying for the unity of the country so as to have a successful, peaceful, free, fair and credible elections.

According the governor, while the convention is a platform to appraise the church’s growth, he advised that children of God should seek better understanding amongst themselves and position the future developmental goals within the broader spectrum of the society.

“The church must be proactive and promote positive ideals, virtues and values that will help us optimize the developmental opportunities being created by the existing democratic platform just as our administration is determined to ensure the successful implementation of the ‘Building our Future Together’ Agenda and individual prosperity for all our citizens”, Abiodun added.

He, therefore, called on the people to play their part in politics by exercising their franchise during the forthcoming 2023 general elections, while charging the youths to be weary of politicians who may want to use them to cause violence and parents to rein in their children to desist from being uses as thugs.

In his sermon, the General Overseer of the Church, Rev’d Samuel Aboyeji who spoke on the theme of the Convention, “Encounter with the Supernatural”, said five keys are needed to obtain sustain and retain divine encounter as every encounter leaves one better than before.

The five keys, Rev’d Aboyeji noted include hearing the right things at all times; hearing correctly and reacting accordingly; removing every obstacle; presenting oneself and asking from God, saying that many christians go through turbulence time because they fail to speak positive things into their lives.

The clergy called on Nigerians to speak positive things and act accordingly, while the nation’s present challenges should be handed over to God for divine encounter.