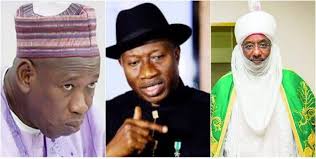 The truth is finally out about what influenced the dethronement of Lamido Sanusi as the Emir of Kano – Governor Umaru Ganduja on Tuesday, December 15, disclosed the deposed emir was sacked to stop a reign of abuse of power –

The Kano governor also stated that the former CBN governor was removed from office in order for the traditional system to be saved.

After months of silence and stretched suspense, Governor Umaru Ganduje on Tuesday, December 15, opened up on why he sacked Alhaji Muhammadu Lamido Sanusi as the Emir of Kano.

Ganduje, during the presentation of a book on a former Nigerian president, Goodluck Ebele Jonathan, explained that he took the crucial decision to save the system and the traditional institution from abuse.

The governor revealed that the appointment of the deposed emir in 2014 was done to despise Jonathan, not necessarily because he was the best man for the job, The Nation reports.

The former Nigerian leader had allegedly sacked Sanusi in 2014 as the then governor of the Central Bank of Nigeria (CBN) over his claim that some persons in his administration stole the sum of $49 billion.

According to Governor Ganduje, Sanisi was not the best man for the job)

Source: Twitter In his opinion, the governor said Sanusi should have discussed the issue privately with Jonathan at the time.

Ganduje said Sanusi was appointed to the envied office to prove that Jonathan was wrong to have sacked him as CBN boss and to please the people of Kano.

2023: This is what will make Igbos produce Buhari’s successor – Governor Uzodinma “But when he was appointed, there was a lot of demonstration with people burning tyres here and there”.

But because of government backing, he was sustained on the stool. “When I became governor, (that’s why you will laugh), I said yes, Jonathan medicine is an important medicine. “That medicine, even though I am not a medical doctor, but that medicine would serve the same purpose, for the same disease and for the same patient”.

“So I took my Jonathan medicine and decided to save the system, to save the institution and I applied it effectively”. So Jonathan and I are on the same page.

Actually, I have no regrets. Meanwhile, Sanusi broke his silence on his removal from office. This came after the former ruler was dethroned on Monday, March 9, following accusations of consistently refusing to abide by the state government’s instructions.

The former monarch in a video that lasted over four minutes and was recorded in Hausa reacted to his dethronement by the Kano government.