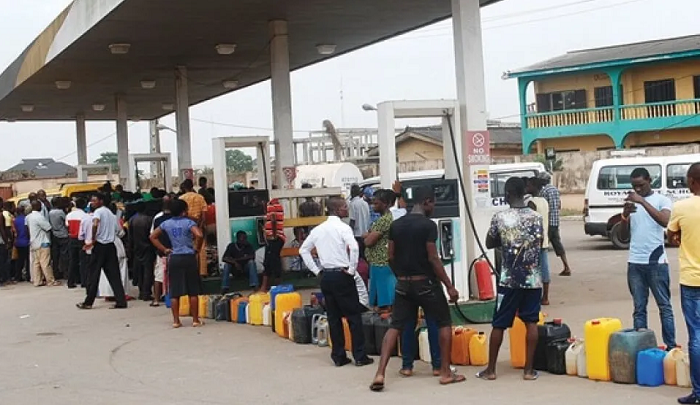 Nigerians have continued to complain about the scarcity of Premium Motor Spirit, also known as fuel, in Lagos, Abuja, Akwa Ibom, Cross River, and other cities across the country.

The Independent Petroleum Marketers Association of Nigeria, IPMAN, recently stated that private depot owners should be held accountable for the ravaging fuel scarcity. NenyKo gathered that citizens now resort to buying fuel at a whopping black market price of N500-700/Per litre because of the unending fuel unavailability.

The situation, NenyKo gathered, was heightened over the weekend in Lagos and some major cities of the country, such as Calabar, capital of Akwa Ibom, where pump price has risen to N500 per litre.

In Calabar city, black market sellers have taken advantage of the scarcity selling for up to N700 per litre.

For instance, a keg of 5 litres of petrol is sold for at least N2500 in Maryland and Ajah of the State during the weekend.

In Abuja, along the Kubwa Expressway, only two of the over seven filling stations were seen dispensing fuel.

NenyKo learnt that some filling stations have stock but refused to dispense the product. But black market sellers were seen with fuel on major roads in Abuja.

The development has caused untold hardship to Nigerians as transport fares, and prices of goods and services have been hiked in some cities.

However, the situation worsened in the last two days as commuters have trekked the distance to their destination in Lagos and Calabar.

Mrs Linda Iheanacho, a resident of Calabar, stated that she bought fuel at the price of N500/per litre on Sunday after spending hours on queue.

Similarly, Okon Mfon disclosed that for the past 3 days, getting fuel has been hell for most residents of Lagos.

He said life has been difficult for commuters and motorists in Lagos and its environs due to fuel scarcity.

Similarly, Emeka Ogenyi stated that his major fear has been on getting fuel for days now

“You have the money but you can’t get fuel without staying on the queue for hours. This problem has been reoccurring for months. I call on the relevant authority to do the needful and save Nigerians from the avoidable stress and difficulties”, he said.

Reacting to the development on Sunday, Independent Petroleum Marketers Association of Nigeria (IPMAN) President, Elder Chinedu Okoronkwo, revealed that the Private Depot Owners are to be blamed for the scarcity.

He urged that the petrol distribution should be left in the hands of IPMAN, which will solve the issue of scarcity.

“There is enough product (fuel), but the distribution is the problem, it shouldn’t be left in the hands of private depot owners. Independent Petroleum Marketers Association of Nigeria, IPMAN, should deal directly with product distribution.

“Private Depot owners are the ones putting the country in this problem. The moment they say the Independent Petroleum Marketers Association of Nigeria, IPMAN, do the distribution directly, it will solve the problem and the price”, he said.

However, the Major Oil Marketers Association of Nigeria (MOMAN) has said that it is working with the Nigeria National Petroleum Company (NNPC) Ltd. to boost the distribution of petrol across the country.

The Chief Executive Officer of MOMAN, Mr Clement Isong said this in an interview with journalists during the weekend in a bid to address the current scarcity of petrol and long queues at filling stations.

Isong said the association had had a daily logistic emergency meeting with the downstream management of NNPCL on improving the supply of petrol.

He explained that the collaboration with NNPCL will enhance the distribution of petroleum products in the country.

“We are doing depot-to-depot check-in and check-out to enhance efficiency, and also have logistic supply meetings with NNPCL.

“There is also collaboration among our members to cushion supply to various MOMAN’s stations”, he stated.