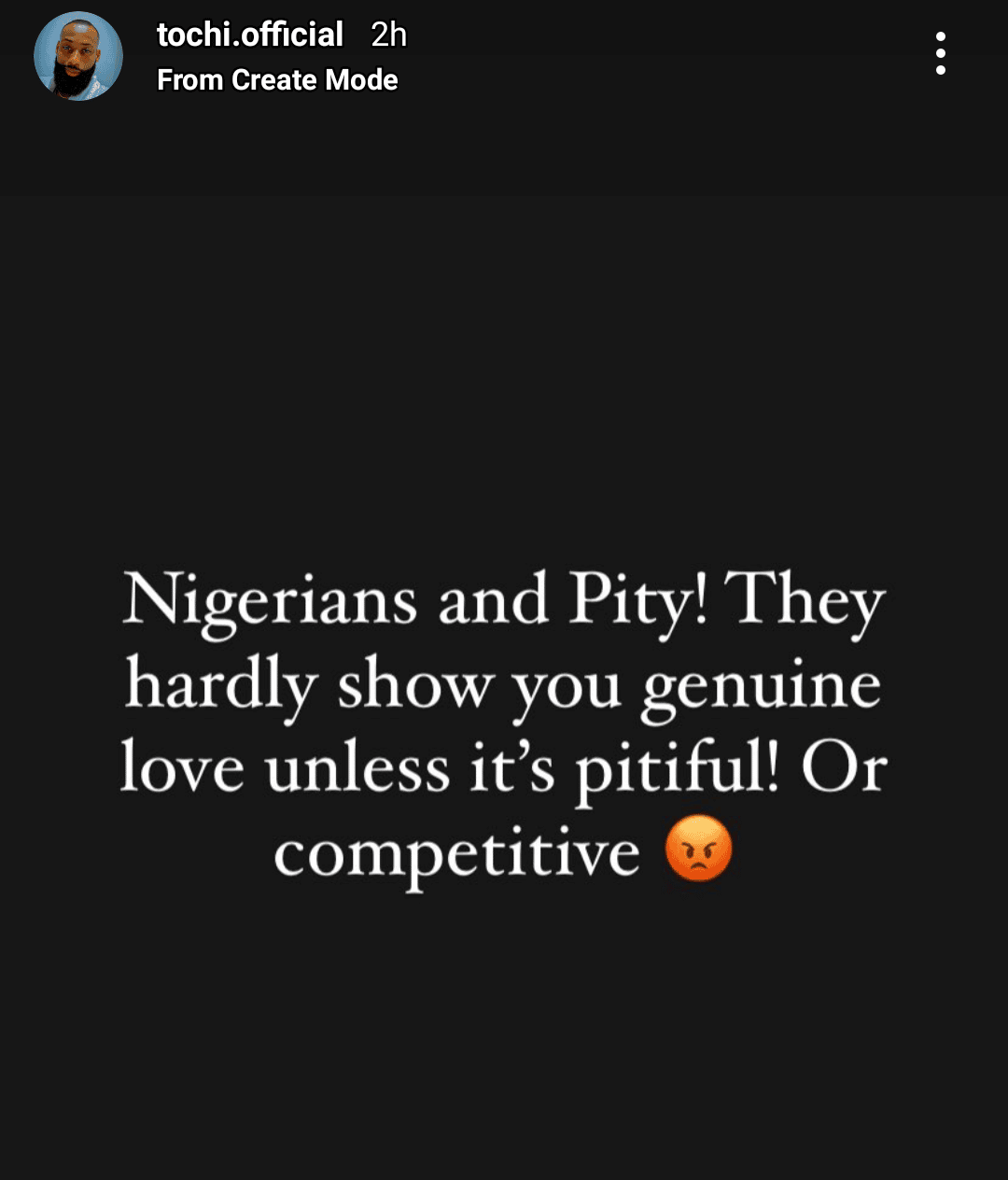 Tochukwu Okechukwu, also known as Tochi, a reality personality, has chastised Nigerians for their displays of affection.

Tochi, a former Big Brother Naija ‘LockDown’ housemate and real estate agent, took to Instagram to express his feelings on Nigerians in terms of affection.

Tochi believes that Nigerians do not show genuine love until something bad happens. Then, messages of love and affection begin to circulate, which can eventually turn into a form of competition.

He wrote: Nigerians and pity! They hardly show genuine love unless it’s pitiful! or competitive.

NenyKo recalls that Tochi disclosed that Nigerians need to be in rehab.

The reality TV star took to his Instagram stories to disclose that comedy and music are what keeps Nigerians sane.

Tochi wrote: If not for music and comedy most Nigerians will be in Rehab.

Reactions have trailed Tochi’s opinion of where most Nigerians belong.

@sandypreneur: Social media has been a blessing to many

@preshquin_presh: I swear.. this right here is the truth

@myasbeauty_place: If not for social media in general

@_debznation: No be lie oooo

Tochi gives revelation on why relationships and marriages crash

NenyKo recalls that Tochi shared own opinion as regards why relationships and marriages crash these days.

The former BBNaija season 5 star, took to his Instagram story to share his two cents. According to Tochi, relationships and marriages crash these days because people care more about how they look than the way they behave with their partners.

Tochi wrote: “Relationships and marriages don’t last this period because most people care more about how they look than the way they behave”.

NenyKo recalls that Tochi sent a strong message to ladies who want to date rich boyfriends.

Tochi, via his Instagram story, took a jab at ladies who want to have rich boyfriends, but their family members or siblings are being spoonfed.

Tochi claimed some ladies want their boyfriends to have cars and other luxuries, but their brothers are lazy and jobless.

He wrote: You want your 23 years old boyfriend to have a car and so much money, but your parents are still feeding your 35-year-old brother in the house.

benbills007: Some of them are still even supporting their brothers struggling at home but when it comes to their bf,they want him to know that he should be man enough to cater for their needs

osamega1: This life don’t balance all this pino pino,

pepenoejiro: This one loud oo