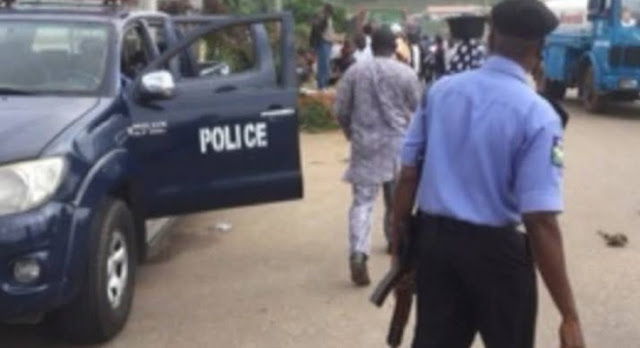 Some villagers have waylaid policemen, abducted 4, and shot the Divisioner Police Officer (DPO) during the mayhem in Aba Tuntun Village, Ijebu-Igbo, in Ijebu-North LGA, Ogun state.

According to the reporter, the village head has complained to the police that some criminals were having guns, and as a result, some team of police took away the weapons hence the genesis of the violence.

Baale had earlier petitioned and complained to the police that some of his community members were in possession of ammunition, which they used to perpetrate their evil act around the village, the reporter said further.

The police swung into action and conducted a search with 15 officers and 35 local vigilantes on Thursday after receiving the information.

Following the successful raid  6single-barreled guns, 16 Dane guns, and 16 cartridges were recovered from the criminals and were arrested by the police.

But their other colleagues who were still armed, ambushed the security operatives, launched attacks on them as they were leaving the community. They reportedly fired gunshots at the police and attacked them with other dangerous weapons. In the process shot the DPO, while others were equally injured.

A village source disclosed to the reporter that 4 officers and 3 vigilantes were kidnapped by the hoodlums who also went away with two AK-47 rifles, one pump action, one teargas, money, and other items belonging to the security operatives.

The source added that the criminals earlier arrested were freed during the attacks on security men while two vehicles belonging to the police were damaged by the hoodlums.

When contacted, the Police Public Relations Officer in the state, Abimbola Oyeyemi, has confirmed the incident on Saturday.

Oyeyemi disclosed that three of the four abducted officers have been rescued. He added that one Constable, Emmanuel Gene was still being held captive by the criminals

Oyeyemi said the police had fortified the area so as to rescue the missing police constable.

He said three suspects have been arrested and they are helping the police in their investigation.

He said,” The incident happened. The village head had petitioned the Police that some hoodlums are in possession of dangerous weapons in the village”

“The DPO led his team to the place with vigilantes and recovered Six single-barrel guns, 16 Dane guns, 16 cartridges and arrested the suspects”.

“While taking the suspects and the weapons to the station some hoodlums ambushed them and abducted four policemen.”

“They shot the DPO in the arm and freed the suspects.

“We have rescued three of the policemen abducted, we don’t know the whereabouts of the constable among them”.

“We have arrested three suspects and they are helping us in the investigation.”