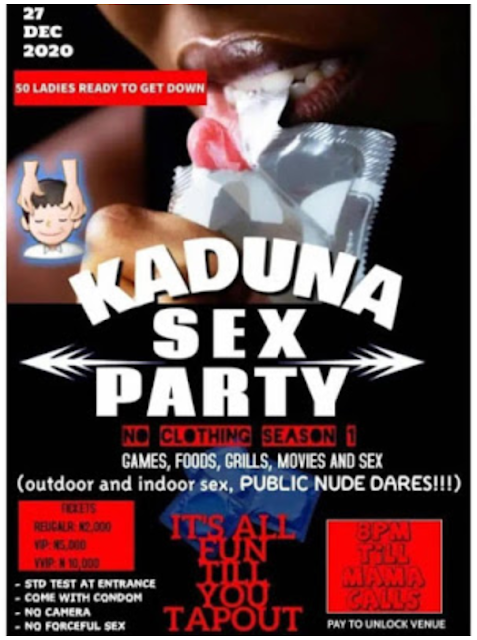 The Kaduna State Police Command said it had arrested the organisers of the first edition of the Kaduna S.e.x Party.

The party, however, which received a high level of publicity on social media and was scheduled for 27 December 2020 at an undisclosed venue in the capital, had been aborted.

Part of the requirements for participants on the invitation card received by our correspondent was that males and females were expected to be unclad.

The party was expected to last until the daybreak during which the participants would have s.e.x for a fee ranging from N2,000 for the popular side and N3,000 for N5,000 for the VIPs.

However, the state moved quickly to abort the party, directing the police to arrest the organisers.

Special Assistant to Governor Nasir El-Rufai on Media, Abdullah Yunus, said the police had gone into the matter and that arrests had been made.

He said the police acted promptly through an advertisement placed on social media platforms.

“When we got to know of this development, the government was disturbed, so the governor, Mallam Nasir El-Rufai, informed the police,” he said.

Confirming the developments on Wednesday, the Command’s Public Relations Officer, Mohammed Jalige, said the operatives were able to track down the site and make some arrests.

However, he did not give any further details as to the number of those arrested by the force.