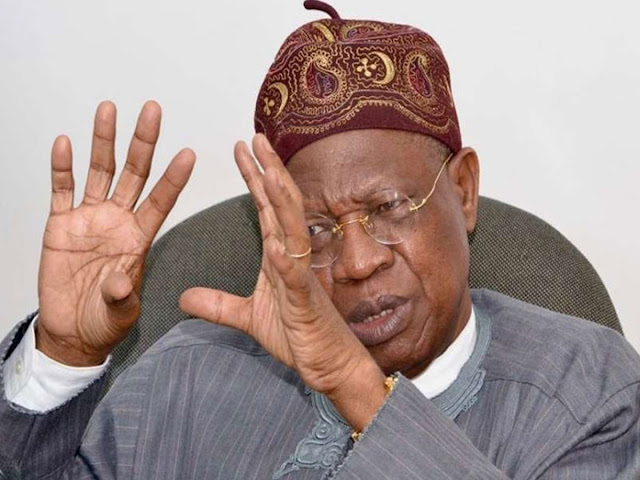 Lai Mohammed, the Minister of Information and Culture, has advice that in as much as the President did not visit Kankara after the kidnap of the schoolboys, he organised the process that led to the rescue of the schoolboys.

The Minister has said this in  a press conference in Abuja today December 18.

while briefing the press, a reporter learned from him why the President did not visit the community after the attack despite the fact he was in the state for a weeklong visit, Lai responded

“Yes, the president did not visit the town but he was busy coordinating the entire operation to ensure the safe return of the students within the fastest time possible”.

Lai  state that no government in the world is immune to terrorist attacks but that the rescue of the students shows that the Buhari-administration places ”premium value on the security of lives and properties.”

“The release of these schoolboys is a testament to the importance that this administration attaches to the security and safety of all Nigerians”.

What stands any government out is their means of  i responding to such challenges. For example, school shooting has been a recurring challenge in the United States. Between 2010 and 2020, almost 200 school children were shot, many died and more were injured in various school shooting incidents.

Therefore , there’s no need saying  world’s most powerful country suffered a tragic terrorist attack in September 2001 that claimed almost 3,000 lives. In France, between 2010 and 2020, 286 people were killed in various terrorist incidents. And in New Zealand, in March 2019, 49 people were

I have given these instances to support the fact that no nation, no matter how powerful, is immune to security challenges.”

The minister cried out to Nigerians who according to him, politicized the kidnap of the schoolboys.

”We can only appeal to those who are quick to politicize the issue of security to desist from such. The reactions in certain quarters to the Kankara incident was shameful. Some Nigerians went as far as denigrating their government and country in the most uncouth and irresponsible manner”.

They should simply know the decent words to use and not to allowed their emotions to take a better part of them. When tragediesand disasters strike, people reason together. We hope the complainers have learnt their lessons. And we hope those who have started trading and politicking with the hashtag ‘BringBackOurBoys’ can now go home, as our boys have been brought back, even before their dubious campaign could take off” he said.