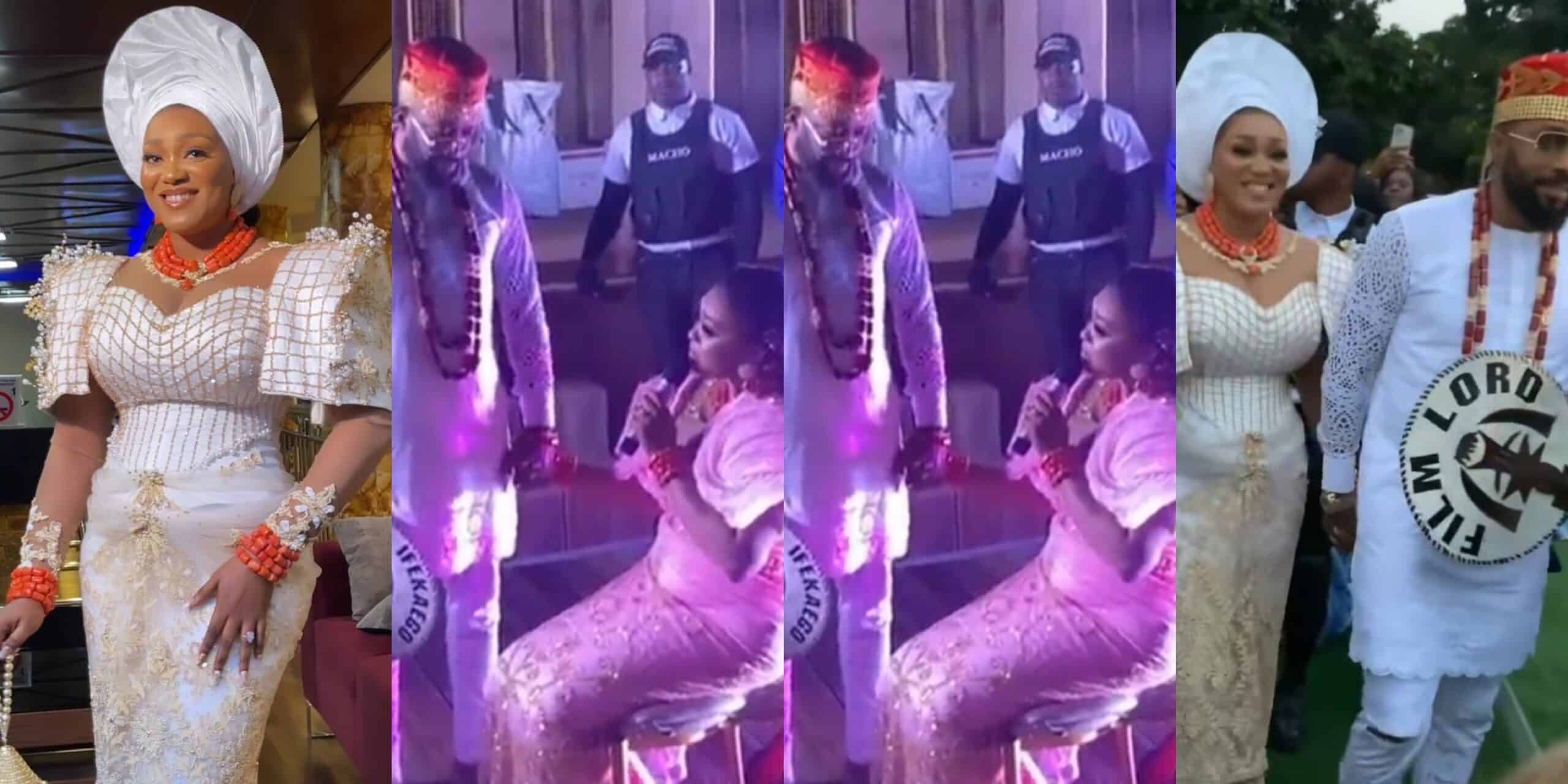 Nollywood actress Peggy Ovire has dished out a word of advice to ladies at her traditional wedding.

The newly married advised her gender to stick with their broke boyfriends.

Peggy, used herself as an example, as she noted how she is enjoying after sticking with Frederick Leonard during his broke days.

She noted how many have been praising her for getting married to Frederick, not knowing that she had stood by him in his lowest days.

Peggy revealed that Frederick promised to spoil her and he has been keeping true to his words.

The wife of Frederick stated that she believed in her husband’s future and supported him until things went well.

“When I see on the internet people say ‘Peggy you are lucky, but they don’t know what I have been through. I have stood by this man.

I have met a man who said Peggy I would take care of you be patient, he promised to spoil me and Frederick has been spoiling me.

I hope this goes to the internet, every girl should be patient. I have been patient”.

She also said, “When I met Frederick, he had a girlfriend, but then I looked at his future,I said that ‘This guy is going to make it’. And till tomorrow, Frederick asks me how did you know that I would get here? So to every young lady out there, if you have a guy that you like and he does not have money, please stay.

Pray for him, listen to him, encourage him. That is what I have done to him”.

This isn’t surprising as Peggy in an interview last year, revealed that she can marry an average man.

The then Ms Ovire stated that she would rather settle with an average hardworking man than a frivolous man,

“Anybody could be rich at anytime, look for a man with prospect. A man with a vision. Most of the rich men you see today, I’m sure married their wives when they were still struggling. Sometimes I wish I wasn’t from this generation, only few still have values and see life differently.”

The Husbands of Lagos star actress avowed that she would never date or marry a man that parties so much.

“I’ll never date or marry a lazy man or a man who loves to party, spend more time outside than his home. A man who’s not into me and who thinks a woman is a slave. A thrift spender who has no moral values is a turn off for me.”

Peggy Ovire speaks on her engagement

This isn’t the first time, Peggy has spoken out on her relationship with Frederick.

Gushing over him, she stated that he was first her bestfriend.

Peggy recounted how Frederick had assured her that he would make her happy and give her the finest thing in life.

She noted how he has always come through for her and how he gave her the biggest shocker of her life on her birthday.

Admitting that it hasn’t been a rosy road for them, she appreciated him for loving her despite her stubbornness.

Praying for him, she wrote,

“You were first my best friend, you always said ‘Peggy I’ll make you a happy woman’ keep praying for me. I’ll give you the finest things in life. I’ll love you right. Everyday you come through & yesterday you have me a shocker again lol. I have watched you grow, blossom & keep to those promises. It’s not been a rosy road. This man right here! For the first time I don’t know what to say to you. But thank you for loving this stubborn girl hopelessly. May God’s favour never depart from your life. May God make his light to shine on you. May good health, prosperity, long life be yours IJN Amen. My husband, the crown on my head. Cheers to forever”.