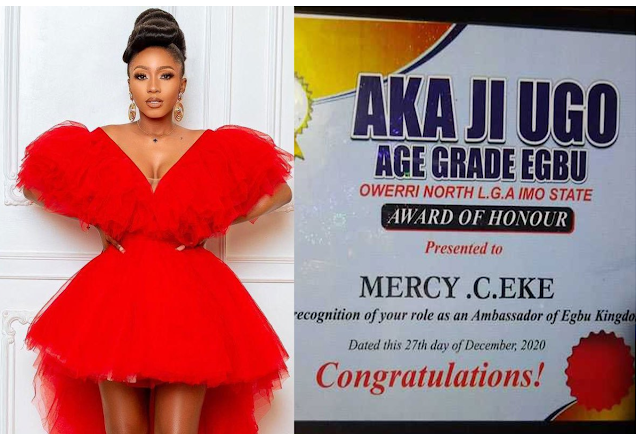 The BBNaija Star, Mercy Eke, has been awarded an ambassador for the Egbu Kingdom in Imo State.

She was given this great opportunity on 27th December 2020, but she decided to be mute about it. It was revealed after a fan shared it on social media.

A screenshot of the certificate given, with her name boldly printed on it was shared by her loyal fans.

The fan has congratulated her on her achievement, and  fan left a lengthy message to commend her hard work in Nigeria.

According to the social media user, Mercy Eke deserves to be the ambassador for her home state due to her strives and roles in the industry.

Read the caption below:

“My dearest sister, with your confidence, perseverance, and dedication to( AkA JI UGO AGE GRADE EGBU) I am really not surprised hearing the news of your recognition of your role as an ambassador of the Egbu kingdom. bravo, what an accomplishment”!

“We are super proud of you my Lambo mercy you have proved once again that dedication and hard work must pay off you deserve nothing but the best”. Congratulation.”

Ike Onyeme’s ex-girlfriend after seeing this got touched, hence, expressed her love for her fans.

She replied to the lady’s post to appreciate their good wishes.

Check the screenshot below: