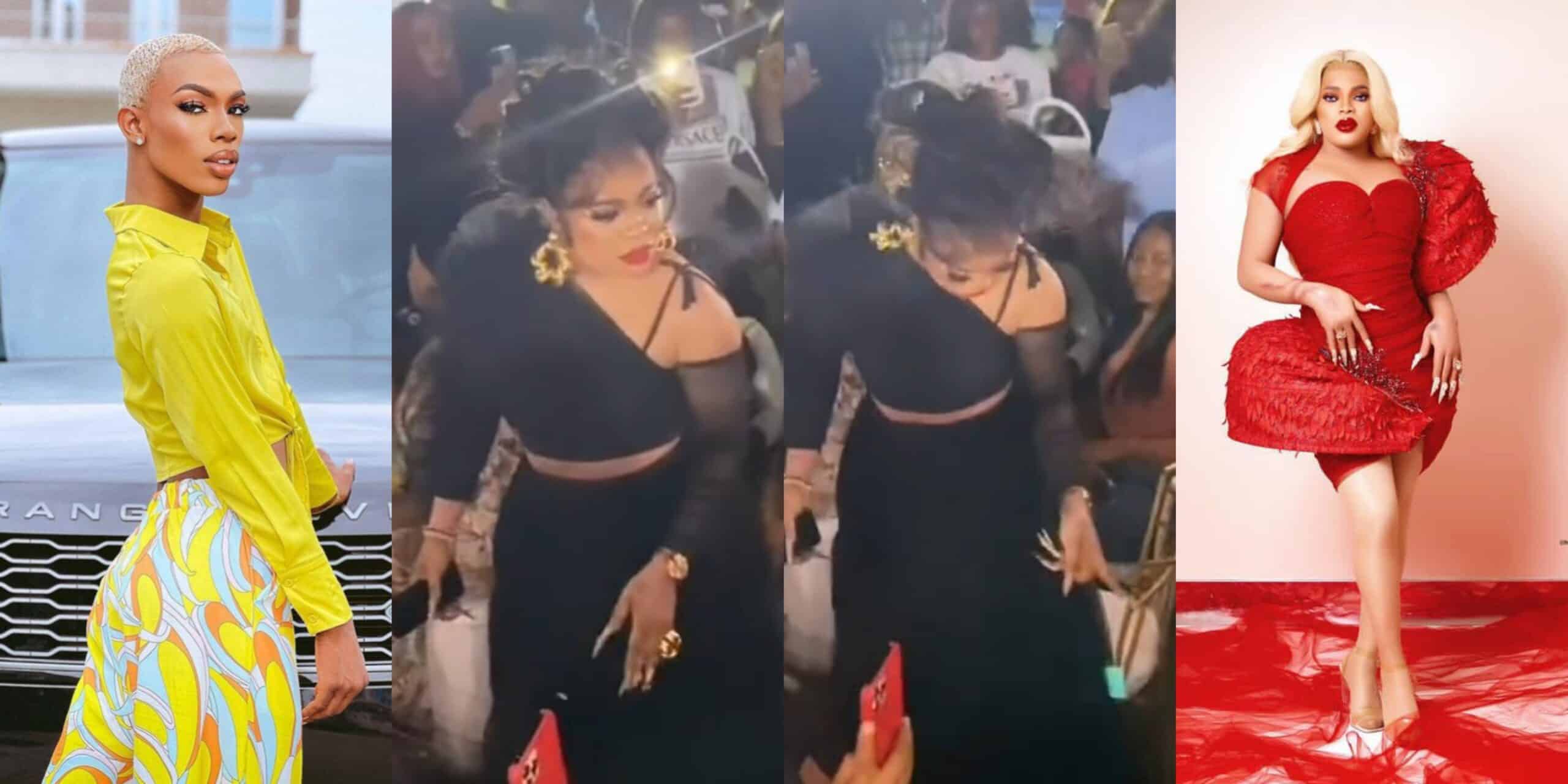 Crossdresser James Brown has continued to criticise his superior, Bobrisky.

James Brown had previously teamed up with content maker Papaya Ex to embarrass him at an event last night, November 19th.

James Brown took to Instagram to further disgrace him, posting a video of him and Papaya making fun of him.

James and Papaya were seen mocking Bobrisky while throwing glances at him in the video he posted online.

They were dancing behind Bob, who was losing his cool fast.

To worsen things, James went to kneel before Bobrisky, who warned him to avoid him.

Sharing the video on his Instagram page, he bragged that he is the new Queen.

In a mockery style, James stated that when he sees his ex-Queen, he respects her.

According to him,he had to greet her good farewell because he is now the new Queen.

“When you see the ex Queen you give her respect. Because the new Queen is here”.

“I needed to greet our Ex Queen a good fare well because I’m now the new Queen of African”.

It is surprising to see the once bff’s at war again.

Just months back, Bobrisky and James had declared love for each other.

During a live Instagram video session, the self-acclaimed Mummy of Lagos declared his love for James Brown, claiming he was happy and proud of who he had become.

Bobrisky claimed he loved that James Brown was improving and doing good and was happy with his achievements.

Bobrisky also urged his fans to send the video to James Brown to let the latter know his feelings towards his career.

James Brown, had also wished his rival congratulations on his latest project.

Brown wished Bobrisky a huge congratulations as he unveiled his new home.

For Brown, despite Bobrisky been his sworn enemy, he saw nothing wrong wishing him well, as even the Holy Book said ‘celebrate your enemies’.

“Congratulations Bobrisky for your new house. Have always believe in your dream. When you used to tell me that you want to get your own big mansion. When I come back, I will come and eat my own cake. Even the bible says celebrate your enemies’, he wrote on Instagram.

James speaks on beef with Bobrisky

James Brown made it known that he hold no grudge Bobrisky, but the latter has been giving him attitude.

Dropping a bombshell about his deteriorating relationship with him, James Brown claimed Bobrisky had threatened his life.

According to him, Bobrisky threatened to kill him if he didn’t stop being a drag queen .

“He is been trending for long, he is respected and is older than me. He has been in the industry for 7 years. I just came 3 to 4 years ago. When I came he supported me in the way he could, gave me money. As time goes I became a dancer from Instagram and moved into being a drag queen at that moment he was threatened and he became my enemy and he didn’t like me.

He threatened that if I keep being James Brown or keep being a drag queen or being the queen of Africow, he would kill me”.