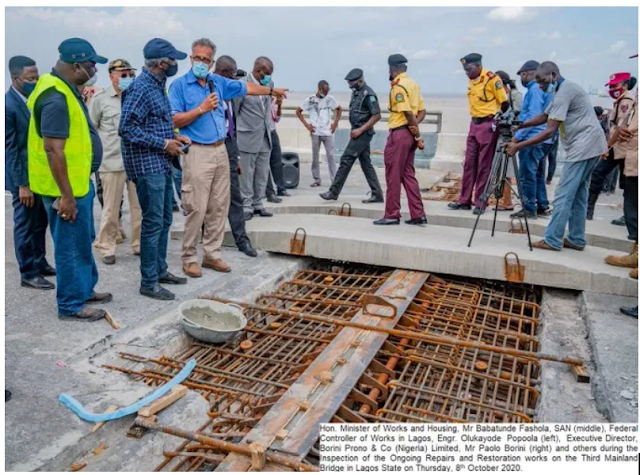 The Third Mainland Bridge in Lagos will be totally shut for 72 hours from midnight Saturday, Federal Controller of Works, Olukayode Popoola said.

The shotdown is to allow for casting of concrete on the expansion joints.

Popoola said that the closedown will last till midnight on Tuesday.

Repair work on the bridge began late July and was to end in January.

The deadline has now been shifted till February, because of the #EndSARS protest.

” The effective date of the closure will be from 12:00 midnight of 25th of December. So people will be allowed to use the Third Mainland Bridge to celebrate Christmas”.

“By the time the Christmas is winding down which is 12:00 midnight, we are going to close it so that we will be able to cast the concrete on Saturday the 26th and 27th we cast again”.

” And we need about 72 hours for this concrete to set. Therefore, the opening will be on the 28th December midnight, that is 72-hour closure”.

“This is to prevent vibration of the bridge. If we allow vehicles to be moving on one lane, there is going to be vibrations and the concrete will not set properly,”he said.

The controller said that all the alternative routes were in good condition and traffic regulatory agencies had been deployed to effectively divert and manage traffic to avert gridlock.

He appealed to road users to cooperate with traffic regulatory agencies.

Repairs on the bridge was initially divided into two phases of three months on each carriageway, starting with the Oworonsoki bound carriageway.

The work dragged into four months.

Traffic was partially diverted on a stretch of 3.5km where construction is ongoing between Adeniji Adeniji Ramp and Ebute Meta, while different time belts were awarded for traffic diversions on the bridge.

The 11.8km bridge is the longest of the three bridges connecting Lagos Island to the Mainland.

The bridge starts from Oworonshoki, which is linked to the Apapa-Oshodi Expressway and the Lagos-Ibadan Expressway and ends at the Adeniji Adele Interchange on Lagos Island.

Constructed in 1990, the bridge was pronounced as the longest in Africa until 1996 when the Oct. 6 Bridge in Cairo, Egypt was completed.