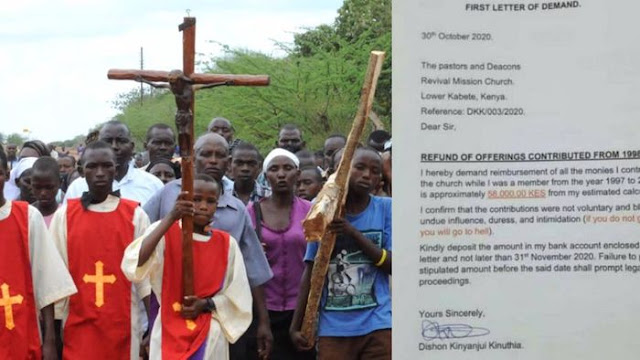 A Kenyan man identified as Dishon Kinyanjui Kinuthia has written to his church and requested that the offerings he has given from 1997 to 2018 be refunded to him. Perhaps he became weary of giving offerings hence his letter of the refund to his church.

According to his letter which was shared on Twitter, Dishon Kinyanjui Kinuthia worshipped with the  Revival Mission Church, Kabete, in Nairobi, from 1997 to 2018 and has now left the church. He has demanded a total estimate of 58,000 Kenyan Shilling which is approximately GH¢3,100 ($532).

According to his letter, he worshipped with the church for 19 years and alleged that all the contributions he made were under “duress”, ”undue influence” and ”intimidation”. It wasn’t ”voluntary”.

Dishon has therefore advised the church to deposit money in his account on or before November 31, 2020, or he will sue the church to court.