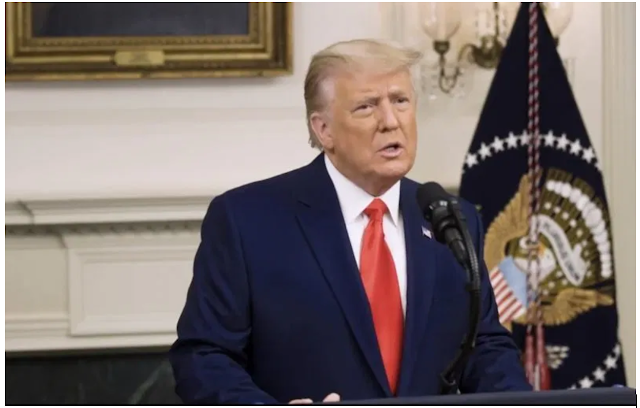 In multiple posts, he denigrated American institutions and blamed them all for his failed election.

“Courts are bad, the FBI and “Justice” didn’t do their job, and the United States Election System looks like that of a third world country”, Trump wrote.

“Freedom of the press has been gone for a long time, it is Fake News, and now we have Big Tech (with Section 230) to deal with. But when it is all over, and this period of time becomes just another ugly chapter in our Country’s history, WE WILL WIN!!!”, he added in another tweet.

Trump had earlier tried to rally Republican senators to upend Joe Biden’s election by the electoral college in early January.

“Time for Republican Senators to step up and fight for the Presidency, like the Democrats would do if they had actually won. The proof is irrefutable! Massive late night mail-in ballot drops in swing states, stuffing the ballot boxes (on video), double voters, dead voters..”,

As Trump continued his post election tantrums on Twitter, millions of Americans are at the brink of losing their jobless benefits, which expire on Saturday.

Trump has insisted that the aid bill did not do enough to help everyday people.

“He stunned Republicans and Democrats alike when he said on Wednesday he was unhappy with the massive bill, which provides $892 billion in badly needed coronavirus relief, including extending special unemployment benefits expiring on Dec. 26, and $1.4 trillion for normal government spending”.

Without Trump’s signature, about 14 million people could lose those extra benefits, according to Labor Department data. A partial government shutdown will begin on Tuesday unless Congress can agree a stop-gap government funding bill before then.

After months of wrangling, Republicans and Democrats agreed to the package last weekend, with the support of the White House.