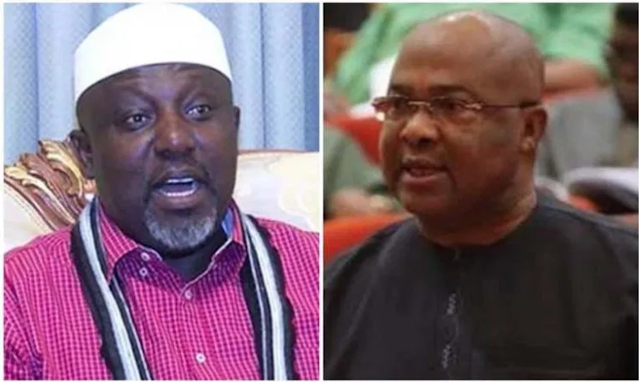 Former Governor of Imo State, Senator Rochas Okorocha and the incumbent Governor,Senator Hope Uzodinma are on each other’s throat over a destruction spree going on in the State.

Okorocha, who currently sits in the Senate has cried out accusing the current Governor of destroying his legacy projects. But Uzodinma whose bulldozers are on rampage insists he is on a rescue mission to beautify Owerri, the State capital.

Senator Okorocha’s Special Adviser on Media, Sam Onwuemeodo, in a statement described the destruction  of seven roundabouts built by his boss in Owerri, as insensitive.

“It has become necessary to appeal to Governor Uzodinma to stop demolishing Okorocha’s projects, which he built for lmo people and for the development and progress of the state, especially, when the incumbent governor is not building any structures and is not likely to initiate any”.

“On Tuesday, December 22, 2020, Uzodinma again, deployed bulldozers to demolish the Orlu-Assumpta Road Roundabout, which Okorocha constructed to ease traffic. He not only built the roundabout, but also expanded Bank Road to eight lanes”.

“Governor Uzodinma chose to demolish the roundabout this Christmas season, when the state is expected to witness influx of people and vehicles. And he demolished the roundabout without telling lmo people why he did that and what he intends to do with the place. This is somewhat, insensitive,” the statement reads”.

“He explained that the project was built on the House of Assembly-Port Harcourt Road junction, insisting that he built the tunnel to save lives, because before the construction of the tunnel, people died regularly on that spot”.

“The former governor, who now represents Imo West Senatorial District, recalled  that the demolition of Somto Hospital on Douglas Road, Owerri, was built in memory of the a 10-year old killed by security operatives during the demolition of Ekeukwu Owerre Market, among others”.

However, Uzodimma insisted that the projects were being destroyed to ease transportation and beautify the state, especially its metropolis.

“He had told Imo people that he contracted a firm knowledgeable on construction of modern roundabouts that would ease traffic gridlock with traffic lights, lamenting that motorists spent hours trying to access other parts of the state”.

“The governor pleaded with Imo people and other commuters to bear with the inconveniences caused by the demolitions and reconstructions”.

But Okorocha disagreed, arguing that due the quality of the materials used in constructing some of the legacy projects, the destroying bulldozers were unable to level some of the structures.

As the exchange of words continues, the Imo people remain at its receiving end.