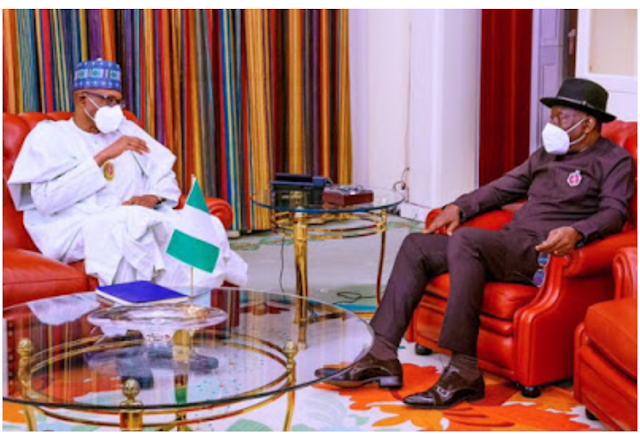 Former President, Dr. Goodluck Jonathan gave a reason why he was in Aso Rock on Tuesday to see President Muhammad Buhari.

He said he was in Aso Rock to inform Buhari on the political situation in Gambia, where the President of the nation, Adama Barrow, is seeking re-election in the midst of political tension and uncertainty.

On Dec. 3, Barrow met Buhari at the Presidential Villa in Abuja, where the two leaders engaged in bilateral talks.

“Things would have been very difficult for us without the invaluable support you gave,” Barrow had said.

However, in a brief interview with State House correspondents at the end of the ‘closed door’ meeting, Jonathan told Buhari about the outcome of his mission to the Gambian capital, Banjul.

Jonathan, who is the ECOWAS Envoy to Mali, said that his mission was to find amicable solutions to the political problem in Gambia.

He said that he had successfully completed the first part of the assignment, while the final part of the political confusion will be dealt with in January 2021.

NAN notes that some opposition groups in Banjul have recently launched a protest calling on the Gambian President to uphold his promise of a single term in office.