US Attorney General William Barr will be stepping down before Christmas, President Donald Trump has announced. 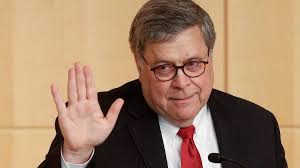 Mr. Trump tweeted Mr. Barr’s resignation letter saying: “Our relationship has been a very good one, he has done an outstanding job!”

Mr. Barr’s term had been due to end on 20 January, when Mr. Trump will be leaving the office.

Mr. Barr’s letter to the president began by saying he “appreciated the opportunity to update” the president on the Department of Justice’s review of voter fraud allegations in the recent elections and “how these allegations will continue to be pursued”.

He did not give further information about the review and praised Mr. Trump’s achievements in the office before ending the letter by saying he will depart from his position on 23 December.