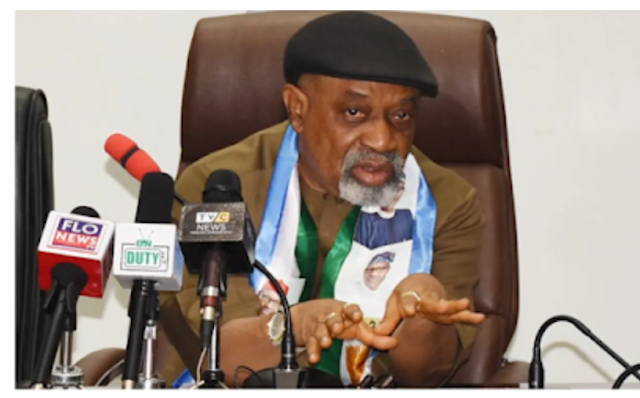 Minister of Labour and Employment, Senator Chris Ngige has decried the alleged imposition of caretaker committees to run the affairs of town unions and local governments in Anambra State.

Ngige said the action of the State government was killing democracy at the grassroots level in the State.

He also warned the State Government to stop meddling in the internal affairs of his community, Alor in Idemili South local government area of the State.

A statement by Ngige’s media office Thursday, said the minister spoke at the 2020 Royal Thanksgiving to God and mass return for the people and the traditional ruler of Alor Ancient Kingdom, Igwe Ebelechukwu Collins Chukwumesili, Ezediohamma III of Alor.

The statement quoted the former Anambra State Governor as saying that many communities in the State were living in bondage without a democratically elected town union and local government system.

He blamed the flagrant appointment of caretaker committees at the grassroots level for the strife and communal conflicts in many communities in Anambra State.

Senator Ngige noted that the town union is the first baseline government in a democracy, but regretted that out of the 182 communities in the State, over one hundred do not have democratically elected town union government.

“That is why you have confusion everywhere. It shows that government has no grip of governance in their place. What they have everywhere is caretaker. We will force the state government to do election in those places through the judicial process.

“The people of my hometown have democratically elected their own town union government and the traditional ruler, without any external interference, just like every other community would want to and should.

“Anambra Government is pushing Alor. You cannot impose somebody who has no education on the people of Alor now, when other towns are presenting people who have diplomas, first degrees, masters, PhDs and even professors as their traditional rulers,” Ngige said.

He equally condemned what he called flagrant disobedience of court orders by Anambra State Government, saying it does not augur well for democracy in the State.

“We went to Okebunoye village hall in February 2019 and did our election for the town union government. The state government went to Appeal Court and the appeal was thrown out for lack of diligent prosecution. Only two weeks ago, they were asking the Court of Appeal to relist the case and at the same time refused to obey the judgment of a competent court even when they don’t have a stay of execution,” he added.

On the controversy that trailed the venue of the event, Ngige noted that they relocated from the previous venue, Obiezeagbudugbu to St. Mary’s Catholic Church to avert bloodshed, following a security report sent to Abuja by the State Government, claiming that Alor will be in flames.

“I thank the entire people of Alor for their good and peaceful conduct during the Thanksgiving and mass return, not minding all the provocation by trouble makers who said they have conquered me. The President knows that I am here. The Chief of Army Staff and the Inspector General of Police know that I am here. You can see all the security here,” he noted.

Ngige promised to work in collaboration with the town union leadership to use the skill acquisition centre in the community to sharpen the skills of the youths in order to make them gainfully employed.

He said, “When they are talking about government, everybody’s attention will be focused on the Federal government while the state governments will hide somewhere, watching. It is always Buhari didn’t give us this or that. What is Obiano giving you? Today, they cannot even build roads. Anambra people are enjoying roads I built as Governor 17 years ago.”

The minister assured that President Buhari feels for the ordinary Nigerians, the reason he introduced the N-power programme, the biggest ad-hoc job creation scheme in Africa, just like the gigantic social investment programme and the school feeding programme.

He announced that the Buhari administration had introduced an artisanal programme for Okada and Kekenapep operators, billed to commence in January 2021 and enjoined all Alor indigenes in such groups, to go and enroll, adding that he would make sure that they benefit.

He promised to work in collaboration with other senior doctors from the community to hire two doctors for the health centre and renovate the doctors quarters notwithstanding that rogues vandalised the Sumo generator powering the borehole he attracted to the medical facility from MTN.

Earlier, the President-General of APA, Uzoma Igbonwa paid glowing tribute to Ngige for his untiring efforts towards the development of the town, and numerous donations, including the palliatives he donated to 1000 families to cushion the effects of the COVID-19 pandemic on them.

On behalf of the entire community, Igbonwa praised Ngige for resolving the prolonged strike of the Academic Staff Union of Universities (ASUU).